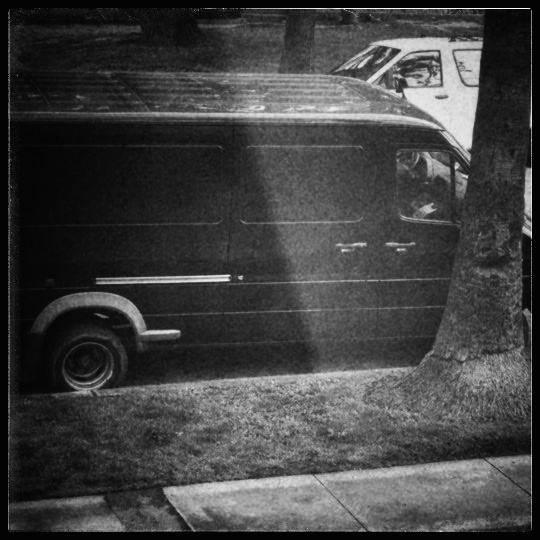 It was the butt crack of dawn and the moving van was still parked down the street. Fine, I’d go check it out. I had to know. Better to get this over with instead of letting my mind run wild with frivolous conjecture. I went to the bathroom to splash water on my face, put on some deodorant, and brush my teeth. Might as well be clean for my abduction and rendition.

My revolver was tucked in my belt and I let my shirt hang out over it. Down the steps and then out to the front sidewalk. I meandered a bit at the gate. Did I really want to go down there and push my luck? Screw it. I opened the gate and with as much resolve as I could muster I started walking in the direction of the van. My heart was racing and there was a dizzy spell coming on. For a split second I thought I saw a light come on in the van but then I looked to my right and noticed it was just a reflection from an outside light that came into view. I was seriously freaking out. Halfway there and I crossed the street to the side the van was parked on. The only sound I could hear was the beating of my heart. I was only a few meters from the back of the vehicle when it started up. I nearly shit a brick. Then it tore off, making a hard right out of the parallel parking, its front bumper taking off the passenger side bumper of the car in front of it.

I pulled up short of the parking space and instead found myself walking backward. The owner of the damaged car was turning on lights in their house, a moment later he was coming out of the front door, baseball bat in hand, anger breaking through any remnant of sleep he had left. He’s yelling at me, “Did you see who that was?” All I could tell him was that it was a moving van of some sort. It said “MOVERS” on the side but no company name. I also noticed that there was no license plate. I didn’t say anything about that to my neighbor, though. From there, I had to wait around until a police officer showed up 45 minutes later. He took our statements and then I headed back to my house.

I knew beyond a shadow of a doubt that this was government surveillance. Afterall, there was no license plate. There was no brand name for the moving company. And hey, they sped off as I, the only possible person of interest on this street, was walking toward them. Then I started to think about how long they had been there. They were there when I got home. Did they come into my home when I wasn’t there? Was my place bugged? Were there mini cameras inside taking video recordings of me. Now I felt truly violated. I really didn’t want to go back inside but I had to just so I could pack up some essentials and get back out. It was time to check into a hotel for a little bit and see if I could get a security expert to go over my home with a fine tooth comb.


I ended up checking into another seedy hotel where my walls could possibly explode in on me from meth cooking. It was cheap though, and I wasn’t made of money so it would have to do. While I was getting ice from a machine in an outside alcove, my cell rang, “Hello?”

“Hey Jim, just got your message from Mamma. What’s up?”

After filing him in on all of the details he took a few minutes to think it over. The silence was deafening. This was too much like a spy movie that I probably thought would be fun to live out but not really “live out”. It's all fun and games until it's a reality.

“They probably have you on some list. You can bet that was the FBI or Homeland waiting for you. You’re digging into a mass kill off. Depopulation by vaccine. They don’t want you blowing the lid on it. Especially since you’ve broken stories in the past. If I were you, I’d lay low. As in get the fuck out of the cities and find someplace secluded and out of the way. Don’t take your cell phone or computer either, they can track that shit.”

“Your funeral, man. But you need to lay low.”

“You think this is really about mass scale depopulation?”

“What else could it be? You have the WEF, the WHO, and techie billionaires demanding we depopulate via vaccination. They’re fucking with our food supplies. Gas is going up, inflation is out of control Everything is being put in place to make us stay in one location. Then that Facebook robot is pushing this metaverse shit as if people should live inside a machine 24/7/365 all the while he’s censoring any opposing views of the fraud in the White House. You tell me? What does it look like?”

Bud had a point. I’d already put it all together but I wasn’t the only one seeing the cause and effect logic here. You can’t simply write this all off as coincidence. There were simply too many things happening that all had links back to one another. And it was clear that we had a fraudulent president and an admin that was hell bound on waging war against the US citizens and the very Constitution that he was supposed to be safeguarding. Every single person who believed in the Constitution and the need to protect it was now sleeping with the enemy. We were all in the den of the lion and we didn't even have to go anywhere to find it. Thanks to technology, it was all over us. They didn’t even need to inject us with a tracking device, the tech companies would just let them know wherever we went thanks to that little cellular computer that each one of us was in some way addicted to. The walls were closing in.
Chapter 4 (Click HERE)
Books Fiction Stories Thriller Writing