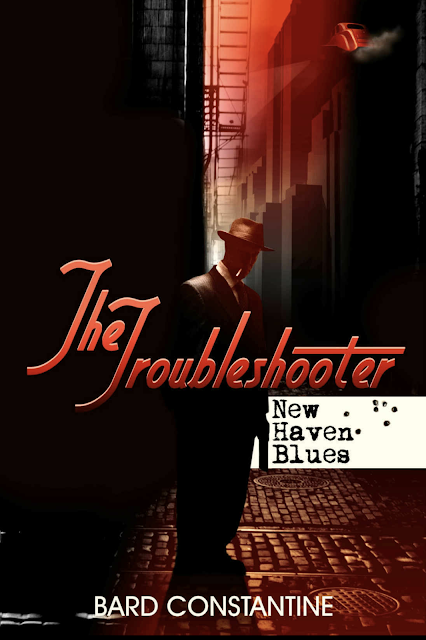 The Troubleshooter: New Haven Blues is considered the second in the series after the compilation of 4 short stories, though I believe this book was written first. The book takes place in a world after some unnamed cataclysm, where Havens (cities with shielding from the outside world) contain the last remnants of civilization. It's a 50's noir meets cyberpunk atmosphere.

the book starts out promising but I feel like the story starts to get away from the author. I also feel like a lot of Sin City-like aspects have been injected into this (The Gutter Girls). The story is in first person, and I love reading first person, but some of the phrases that keep popping up get a bit tired. How Mick Trubble "tips his hat just the way he likes it", or how the gun is always referred to as "the mean ole' broad", or how every woman is a dame and never referred to as anything but being a dame. It's over and over and over again.

The story starts out fairly strong but then at about the 20% mark it becomes a fetch quest from one plot point to the next. Every chapter then contains some sort of action around that chapter's plot point. There's no real character growth since the story is all about location and action and getting to the end. While reading it, I could predict when the "talking parts" of the chapter would end so the action parts could begin.

The book climaxes at around 80% but then we go into a Lord of the Rings: Return of the King (movie) type of ending where every chapter feels like the book should be over but it just keeps going and going. The last 4 or 5 chapters cold have been reduced and given a much better pacing.

Given that this is an early book for the author, I get why it is a bit shaky in some parts. Still, it's worth a read and it's worth getting into this series. There's 2 more books in the series and I'll get to them sooner or later but I need a bit of break in between.