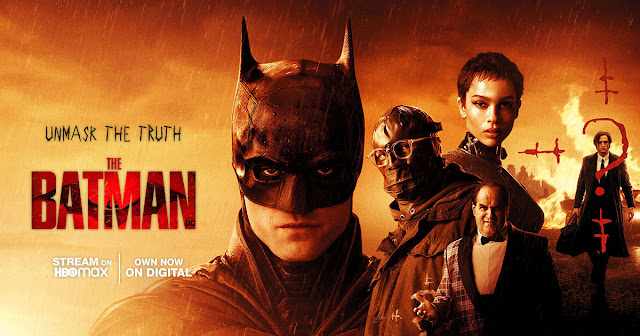 I watched The Batman Emo-man on HBOMax and it is definitely... ﻿#NotMyBatman

- Long and boring
- I hope you love "Somethings in the Way" by Nirvana because all of the theme music is a variation on the music of that song, for 3 hours. I used to like that song but it's not worth hearing over and over and over again!!!
- Worst portrayal of Bruce Wayne yet (and the Wayne family). If you grew up on the comics then this is what is called, taking a shit on the character. Even Clooney was a better Bruce Wayne!!!!! That's how bad this version is. Complete and utter emo drab.
- Riddler mobilizes "home grown terrorists" via the web against corrupt political officials. It's like a  Hollywood wet dream. It's a movie about protecting the corrupt political infrastructure in some sense. Yikes!!!
- Cat Woman is a racist. She has to specify the, privileged "white" men, specifically. So, I'm calling that what it is, racist and bigoted dialogue.
- Gordon should have just been Robin because he's Batman's sidekick for a huge chunk of time. Kind of lame.

All in all.... IMHO... this movie was not very good. Props for not being a CGI vomit fest on the screen but... still not a good move. It's very much a product of its time for the woke who have a real issue with figuring out what the difference between good and bad, right and wrong, and so on and so on, is.
Batman HBOmax Movie Review Movies The Batman