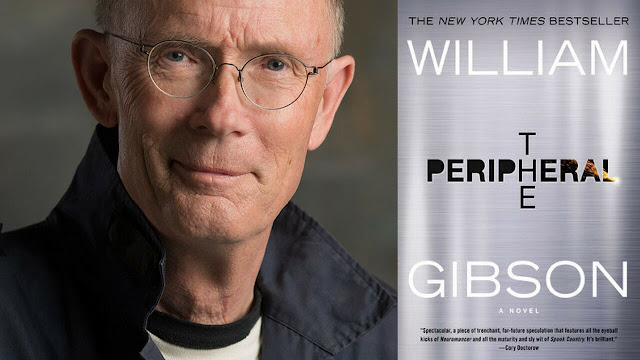 It’s been a long time and many books since William Gibson came onto the scene with Neuromancer. With The Peripheral, he proves once again that he is a master of innovation and placing words on the page that come off as pure art.

In this new world, those in the future can reach back into the past and manipulate events to a certain extent, but that doesn’t change the future for those doing it. It creates a branch, or a stub, and the history in that stub has a new direction, from that of the one in the future, that reached back.

In this case, Flynne is subbing for her brother who was working a security detail in the future (via a peripheral drone), and she sees a murder. Now those in the future want to make her disappear from the past. Wilf Netherton, also in the future, along with Ash, Lev, and Lowbeer are manipulating the stub to protect Flynne while they try and find out who the murderer is. Flynne can visit the future via a synthetic peripheral that resembles a human, so that she might be able to identify the murderer. It’s just a matter of finding the murderer before both sides tear apart the economic and social fabric of the stub they are fighting over.

I admit, it gets complicated and this was the second time I read it. I enjoyed it a whole lot more on the second read through because some of the concepts were easier to “get” when you know where it is all going. You have to be prepared to work a little with a William Gibson book. This just comes with the territory.

The reward is a story from a master author that can break writing rules and create words that are their own form of poetry on the page. There are sentences and paragraphs that hardcore editors would never allow to be published but to the praise of Gibson’s editors, they let him have his way. True mastery has to be applauded for what it is and William Gibson is a master of his own unique style.

I’m currently reading the second book in this The Jackpot Trilogy, called Agency. I haven’t read this one before so I’m excited to see where this universe goes. There are so many possibilities and stubs that can lead to new stories.

The Peripheral is also coming to Amazon as a series from producers/writers Jonathan Nolan and Lisa Joy (Person of Interest and WestWorld), so you know this will probably be a really great cyberpunk interpretation on the small screen. Better read the book now so you are ready for the show when it hits!
2021 Book Title Completion Count: 32
Book Reviews Books Cyberpunk The Peripheral William Gibson