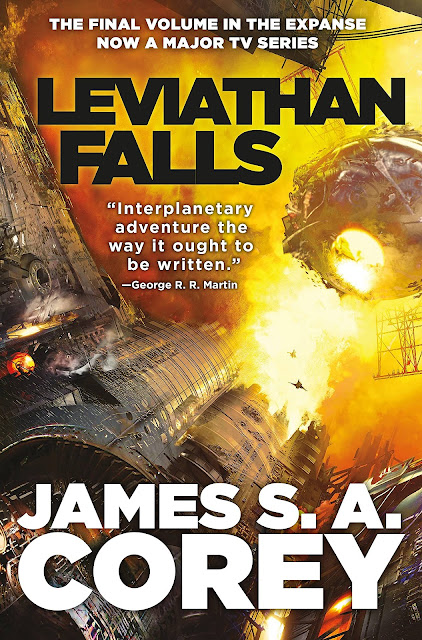 After 9 books, what a complete and colossal waste of time.

The Expanse series hasn't been any good since the author's best book, Nemesis Games. After that one, the writing went downhill fast. And it all comes to an end with this 9th book, Leviathan Falls.

After 9 books, we should finally find out something about the aliens who created the protomolecule right? Well... other than they were some kind of jelly fish like being, not really. Well then, we should surely find out something about the the ancient alien race that wiped them out right? Hold your horses, because the closest you get to that is that they are some massive snake like impression and outside the universe.

So hold up... Since book one, we've been waiting for the ultimate battle between humans and these aliens and it doesn't happen?

Here's what you get though:

- Shallow characters who all talk the same. Someone please count how many times every character answers or replies with "All right." EVERY character uses that phrase, over and over again. It must be one of the author's favorite lines/replies because every character is given this singular voice.

- Speaking of common phrases, count, "on the float" too. Whereas past books used "bulb of tea," here, everyone is always "on the float."

- Completely lazy and redundant writing. One chapter's character point of view will end, and then in the very next chapter, we'll rewind and have to go through the same scene with another character. That means reading the same conversation you just read in the last chapter, for several pages. It's so lazy and a hack way to write. These chapters become pages to skim.

- Speaking of skimming, all of "The Dreamer" chapters and "Kit" chapters can be skimmed or just passed over completely. They add nothing of interest.

- The Tanaka chapters are fairly pointless. We have to go through some where she talks to a shrink and is angered by someone not wanting to do her. Yes, this is what we all turned into this book series to read. Hours of needless exposition that doesn't actually build character at all, nor move the story forward. It's all pointless and just a waste of time for the reader.

- The big baddie, Duarte, has suddenly decided that spreading the Laconian empire isn't his goal but his ultimate goal is to make all humans into a hive mind (Borg, you will be assimilated) so that he can fight the trans-dimensional snake impressions and remake humanity.

When you get 80% through the book and you have yet to find out anything interesting about the ultimate ancient aliens, then you get that sinking feeling that this entire book series was a massive waste of time. Did the authors just phone it in after they got the TV series (which ended with the 6th book)? How in the world did the writing and story get so bad after book 5?

I started the year reading Tiamat's Wrath (as the second book I read in 2021) and I'm ending the year with Leviathan Falls. Two out of four of the worst books I've read this year. I have to give Leviathan Falls the honor of being the absolute worst. I really wish I had never wasted any time on this series. I do know for a fact, that I will NEVER read another book by either of the authors, ever again.

I really don't like giving bad reviews but... this was just bad writing. I feel like after the excellence of the first 5 books, everything else was just phoned in and the readers were scammed hard. It has been a massive disappointment.