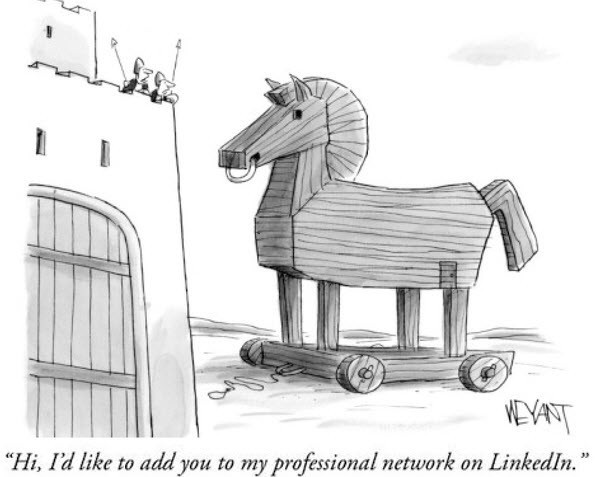 LinkedIn is the social platform of the "professional". Or so I keep seeing in post after post on that site. "Don't talk about this, this isn't Facebook. You can't post that, this is a professional site. Why are you posting something that people disagree with?" and on and on...

These LinkedIn people need to get over themselves. It's just another site in the same category as Facebook or Twitter, which branded itself as a social jobs board. It runs on a sketchy algorithm that is way more invasive than Google, Facebook, and Twitter combined. The insipid drivel from a score of people posting there is so shallow and fake that it is hard to take any of them seriously. These are people obsessed with their titles and think their reason for existence is defined by their position. That's beyond fake. That's the company suck up, times one million.

There is more to life than fake company slogans and recruiters who are ignorant of any job description not written in bullet points before their very eyes. I've never looked at any job I've ever had as being a reflection of me and at the same time I've never ever claimed to be the reflection of any employers ideals. I don't define myself by any one else and certainly not by a job. At will laws, are to me, simply that. I'm trading my skill and time in doing something for money. That does not require me joining a cheer squad or creating ass kissing posts on a social haha platform. And that is what LinkedIn is, just another social haha site.

"Whoa... Where is this LinkedIn anger coming from?"

I saw a recruiter lay into someone's post, that had made a political comment that was tied into jobs and the workforce. Specifically the anti-science mask and vaccine mandates that some companies play mini tyrant in pushing. Let's ignore the lame pronouns she uses in her heading for a moment and concentrate on the nitty-gritty.

1) Why is she assuming that a person posting would even want to work for a tyrant pushing mask or vaccine mandates? Chances are, the love of freedom and liberty probably outweigh the need to work for anti-freedom and anti-liberty tyrants. For some people, principles still matter.

2) Keep pretending that LinkedIn is a "professional platform". Please, it's oh so cute. It's nothing more than another social networking site that pretends to be "professional".

3) Recruiters are always so full of themselves. They become the gateway gods to corporate entry and want you to remember to act accordingly in their main playground.

And as far as being held to "different expectations"... Get over yourself. You have goddamn pronouns in your title. I wouldn't want to deal with a person that is so illogical that they define themselves by pronouns. How is that even noteworthy on a professional level?

And while we're at, Liz is making a statement with those pronouns. I sure wouldn't hire someone that defines themselves by their pronouns and shoves that in other people's faces. Let's get real here, this is a "professional" site, right? Why do people like Liz get to push their political ideals and points of view, even in a passive aggressive lame pronoun way, but the rest of us can be told that our principles and ideals are not allowed on this "professional" platform???

Sorry sweetie but no thanks. Get a life.