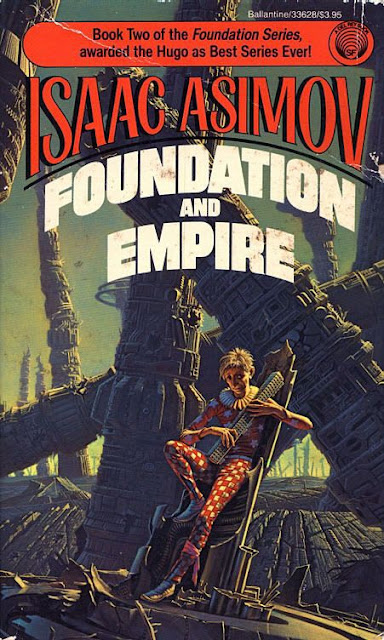 Foundation and Empire is the second book in the Foundation series written by Isaac Asimov. This book is split up into 2 separate stories. The first story is about a general that is bound and determined to take on the Foundation and bring it to it’s knees at the foot of the Empire. The second story is about the elusive mutant called The Mule, who mounts a successful campaign that defies the visions of Hari Seldon and does bring about the fall of the first Foundation.

Like the first book, the writing sets up scenes where people talk about what is going on and how it effects the empire or the Foundation. Think of a play or 12 Angry Men, and you get the idea of how the story is presented. For example, in the second story when The Mule comes to take over the Foundation, they look to the sky, see his ship, and basically declare that he has won. I will concede that there is a reason for this, at least in the second story, but it’s a different kind of writing than the space opera action that most people are into.

The first story and then the first half of the second story was a slow grind slog to get through. However, in the very last chapters of the second story, things start coming together and their is a massive revelation made, followed by a cliffhanger that demands one read the next book in the series.

In fact, the second story actually fleshes out some characters, unlike all of the short stories proceeding it. I actually felt like it started to become an actual story that had a place to go. The characters travel to New Trantor in the search for the location of the Second Foundation, now that the first one has fallen to The Mule, and we actually get some cohesion between them. Enough that when a revelation is made, it has an actual impact on the reader, for sticking with the story.

I’m not planning on diving right into the next book, Second Foundation, just because of the cliffhanger. I need some breathing room when it comes Isaac Asimov’s writing style. He’s more about selling the reader an idea of something, rather than putting forth a story that has a definitive beginning, middle, and end. The jumping around from one character to the next and one story to the next, takes the reader out of the entire story to a large degree and makes it hard to see where the author is taking us, or even why we should follow. I will get to the third book eventually. Just not right now.