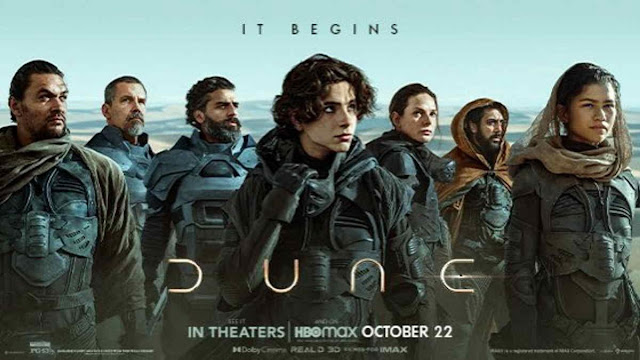 Dune is a good movie but as a longtime fan who has read the Frank Herbert book series 5 times over, seen the 1984 David Lynch version countless times (even when in debuted in the theater), and have watched the SYFY mini-series (as well as the Children of Dune sequel series) over and over, it feels more like an update in visuals more than anything else.

The pacing was a bit slower than I thought it would be. For some reason, I thought we would at least get to Paul drinking the water life. Instead, it cuts off after his crysknife fight to defend his mother’s honor. So we didn’t get as far as I thought we would get. Another issue is that I could still recite the lines, and they did admirably in staying true to the book, until they didn’t. The thing Lynch got 100% right with the 1984 movie, was adding in the thoughts via voice over (like in the book). So much context is lost without that narration. There were times, like when Paul see’s Dr. Yueh’s mark in the ornithopter (after Paul and Jessica have been taken). I knew what he was looking at. I knew what it signified. But someone who has never read the book or seen the 1984 movie, would be clueless. This happens time and time again. I think the loss of the narration was a big missed opportunity and one reason why the Lynch version stills holds the crown. Hey, they got the ornithopter right this time. That was nice to see.

The actors did well in their parts. However, the Baron was too… dour. To much of a cliche version of evil. The Baron and Rabban didn’t have enough lines to flesh them out or lend credence to why they wanted Arrakis back. Feyd was non-existent and the Emperor and Irulan were also nowhere to be found. Thufir and Dr. Yueh had less of presence here than in the other productions. Mentats were not even explained. Duncan was given more of central role, even though he really didn’t play much into the first book (it was his Ghola (clone) that played a bigger role in later books). There was also no need to race and gender swap Liet Kynes either. That seemed like a lame social justice move that had no reason to be made. While the cast did well enough, there was still a ton of missing content that the other movie/mini series did much better in fleshing out. Pretty moving pictures are not a substitute for story and character depth.

Part 2 has been greenlit, so I’ll definitely see it. I’m a hardcore Dune fanatic (Although when it comes to the books, please stay away from any books written by Brian Herbert and KJA, as they are nothing but Dune fanfic and not worth reading). Of course I’m going to see Part 2. Though, at this point, just going by story and character depth, this comes in third to the two prior tries. As pretty as the updated moving pictures are, the Lynch version still has the atmosphere that captured the book, second to none.

It’s definitely worth seeing and it’s a welcome addition to the Dune universe. Best of all, it’s not another mindless superhero flick. There is some depth here, however, I recommend reading the book or watching the Lynch version first, just so you can get all the context that is not readily apparent. You’ll get more out of it that way.
2021 Dune Movie Reviews