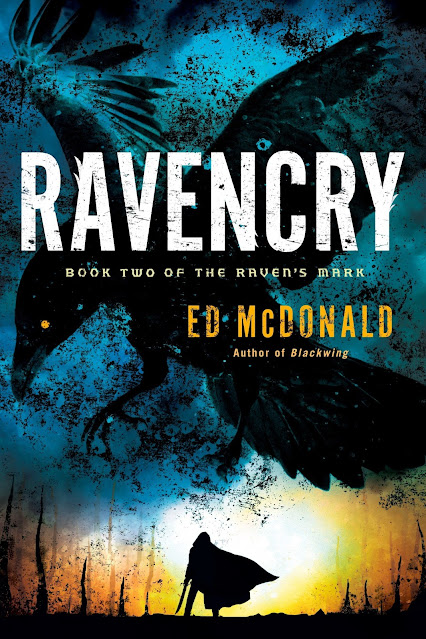 Book 1 of the The Raven’s Mark trilogy, BLACKWING (Review), was an amazing opening on a new steampunk-like grim dark setting. We were told of the Nameless and their battle with the Deep Kings. We walked through a magical wasteland called The Misery. We met, and saw the world through the eyes of a Han Solo-like anti-hero named Ryhalt Galharrow. The book was so good that briefly knocked my current favorite book for 2021 (Hyperion -Review), out of the number 1 spot, to take the lead. If only book 2 could have carried on that greatness…

I think my expectations were high and I thought for sure that we would get more into the war between the Nameless and the Deep Kings, however, that was not the case. RAVENCRY is the story of trying to stop an evil “wizard” from becoming a God. It’s also the story of seeing a Han Solo-like character reduced to a whining and emotional wreck. I don’t know about you but there are only so many times I want to read about the “tears rolling down my face” of the main character. It’s not enjoyable. Especially in a first person story.

Add to that, the talk of love saving the day, the warrior woman faced with her biological clock ticking, the “love saves the day” ending even… Ugh… No. This book doesn’t have any of what made the first book so damn good. There were multiple times in this book where I wanted to put it down or did put it down because the main character was so insufferable.

This book took me 5 weeks to get through, whereas the first one took me less than a week to read. The main reason was because it was such a joyless slog to read and didn’t hold my attention, so I started reading another, more interesting book, at the same time.

The biggest cringe moment takes place in the last 10% of the book when the lead character gets this phos (magic) cannon armor. He becomes War Machine. It’s basically an Iron Man suit to take out an army so he can get to the evil wizard. If this had happened earlier in the book, I would have DNF’ed (Did Not Finish) it right there.

I had already bought the third and final book in this series but I’m not jumping right into it. Especially since I decided to read the reviews and it apparently is another side quest story like this one. Perhaps the author plans on dealing with the interesting Nameless vs the Deep Kings in another trilogy, but I’m not sure I even want to take that ride now.
2021 Book Title Completion Count: 27
Book Reviews Books Ed McDonald Grimdark Ravencry