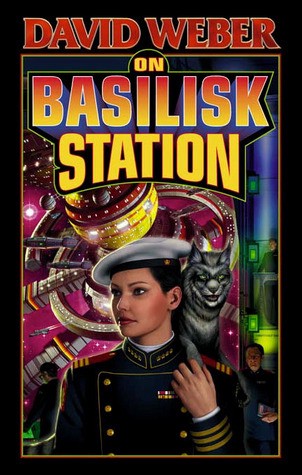 Never let it be said that there is a vacuum of heroic woman in the media. On Basilisk Station by David Weber (published in 1993) introduces us to Honor Harrington, the captain of the HMS Fearless. Honor Harrington is the type of lead female in story telling that is completely missing from today’s forced and most often inorganic diversity. She’s also not a “Mary Sue” type of character (perfect without any flaws, think Rey from the latest Star Wars sequels). Honor has doubts and issues that she rises above to complete her job and carry out her duty to the Manticoran Navy. She has depth of character and I can’t for the life of me understand why this series has not been green-lit for the jump to film? If a film is made, I’d love to see Morena Baccarin (Firefly, V) play Honor Harrington. I think she could totally pull off the part.

The Premise: When Honor is placed in command of a small ship and sent to an insignificant outpost at Basilisk Station, she must gain the respect of her new crew while also performing the duties of the Navy, that have been sorely mismanaged by previous commanders to the post. What comes is a game of politics, drug running, espionage, and a climactic space chase/battle that is an exciting page turner you won’t be able to put down.

The politics that are hit on have real world parallels to many events we see happening today. I made several highlights that stood out as stark reminders that as much as we want the politics to change, they rarely do. The intrigue that sets up the final battle in this book makes this an overall page turner. It is through this intrigue and the duties of the crew to accomplish an almost impossible task, that we come to know and care about the characters. When the thrilling climax begins, you do not want to put the book down. The pacing of the intrigue up to moment you hit the climax is perfect. I loved the last 20% (Kindle terms) of this book so much because it was just so visual, exciting, and thrilling.

If you liked Star Trek: The Wrath of Khan and/or The Hunt for Red October, then this is a book for you. It has that military strategy and ship to ship cat and mouse that puts you on the bridge of a ship and right in the action.

I will be definitely be continuing on with this series. So far there are 14 books in the main series, with The Honor of the Queen, coming up next. So if you want to a thrilling book with a strong female lead or an awesome Sci-Fi military space opera, then this is a really good book to check out.
2021 Book Title Completion Count: 28
Book Reviews Books David Weber On Basilisk Station sci-fi