This World has Gone INSANE!!!

A virus that has a 99.9% survivable rate, has unleashed the hive mind tyranny on the world, all in the name of Public Health. 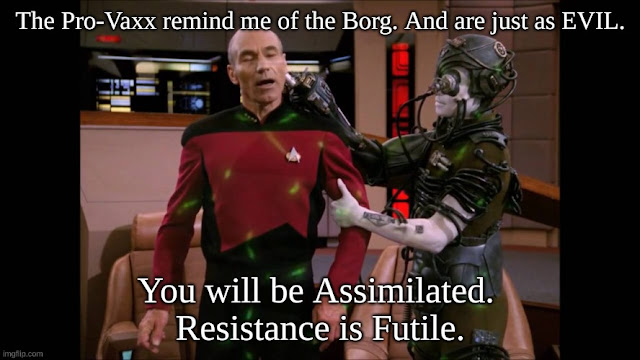 The forced mandates for masks (38 and counting peer reviewed studies all show masks do nothing), for lock downs (no difference in infection rate for locked down regions vs non-locked down regions), and for vaccines (that don't prevent the infection, the spread, or even getting sick from it and ending up in the hospital or dying) is a display of tyranny in real time. None of these courses of policy are following the science, even though they keep claiming that they are. This doesn't even appear to be about healthcare anymore. It's about forced compliance.

The CDC and Fauci have been caught in numerous lies. They've departed from the science and data and have said that they are now working on nothing but "hope." Hope is not science. We have public policy taking the place of science now, and it is based on nothing.

Freedom, liberty, and individualism is being sacrificed to the public health mob over a virus that is 99.9% survivable. This is sickening, vile, and completely Un-American. Yet here we are. Lawyers are not taking cases, courts are not hearing cases, all because we now have a total breakdown of law and order and checks and balances. Good luck finding a lawyer to take your case against an employer that fires you for not bending the knee to hive mind vaccination crowd. Chances are, your case will fall on deaf ears.

Look at Australia right now. To cross a border from one region to the next requires proof of vaccination. People's families are separated by an imaginary border because of this. Australia has gone full on Nazi Germany in the name of public health. You can't tell me that this is still about healthcare when this tyranny is going down.

Every time the Biden administration announces something new, I say to myself, "What now???!!!???" They've perverted what Executive Orders are to the point where they mean nothing. An EO only applies to government employees at the level the EO was written. It does not apply to private businesses, contractors, or any anyone else. But we have no rule law, no checks and balances, and no way to stop these presidential royal decrees. Fucking nonsense.

Good people will lose their jobs because this senile tyrant is making illegal decrees and the hive mind populace is too dumb to say: NO.

Once you take these experimental gene therapies that are masquerading as vaccines, you can't un-take them. The gene editing is forever. So any side effects that develop, and there are many that are known and suspected, are not going to be "fixed". You can not sue the drug maker, you can not sue the government. You are being forced to take something that there is no coming back from and no one will be held responsible for any side effects. Sit back and watch as public health massacres freedom and liberty.

You are a lab rat being used for Big Pharma and politicians to rake in the cash revenue. That's all you are. If you are out there pushing the vaxx, then you are clueless when it comes to the science and nothing but a useful idiot for the hive mind. Congrats on your assimilation.