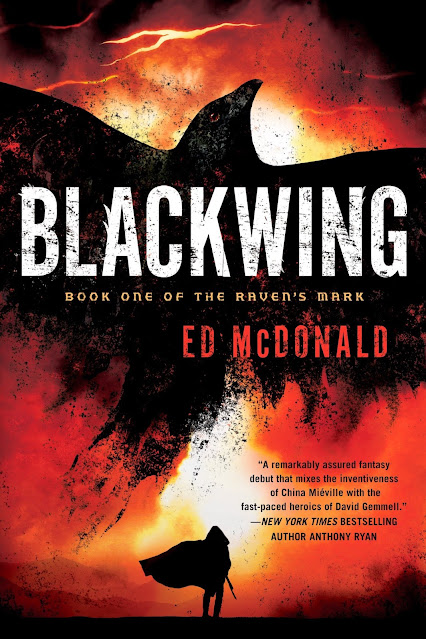 BLACKWING by Ed McDonald is an awesome opening book to what I hope becomes one of my favorite trilogies. For 2021, I thought for sure that nothing would top Hyperion by Dan Simmons but I may have been wrong. BLACKWING has dethroned it for my favorite read of 2021 (so far).

The premise: Blackwing follows a man (in first person, my favorite point of view by the way) named Ryhalt Galharrow. He begins as a bounty hunter type, who tracks various law breakers into the Misery. The Misery, is this magical waste land that separates the population from the Deep Kings and
their army of magical creations called The Drudge. The main city and various outposts along the Misery have an interconnected weapon called The Engine. This weapon is what has kept the Deep Kings at bay for so long. It is the only thing that can wipe them out, by using massive amounts of phos (magic harvested from the moons).

Crowfoot is one of the last remaining Nameless and he, to some extent has control over Ryhalt Galharrow. His crow image is tattooed on Galharrow’s left arm and when he needs to contact him, he manifests as that crow breaking free from the arm. A very bloody way to converse. However, one that is completely unique and interesting. Crowfoot tasks Galharrow with saving Ezabeth, a magic user who can use the phos, spun from moonlight, in her quest to discover a cover up. Does the Engine still work and is it able to defend them from a Deep King assault.

I love the characters here. No one is specifically good, and everyone lives in the gray. I may have highlighted more lines from this book than in any Kindle read before. The land isn’t your standard fantasy realm either. Here, it almost feels like it verges on steampunk mixed with grimdark fantasy. Again, totally unique and not to be found anywhere else (at least I haven’t seen it elsewhere).

I highly recommend this book to anyone looking for a steampunk or grimdark fantasy series that is different from the norm. Now, off to read the next book in this series: RAVENCRY