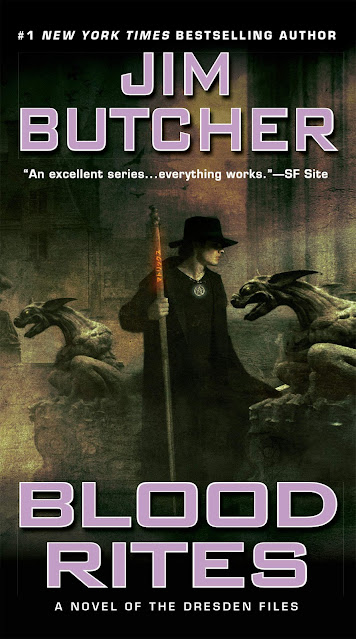 Harry Dresden is back and this time he’s hired to protect a soft-core skin flick production. Someone is hellbent on using a powerful curse to kill off the women on the production, thereby tanking the producer and blacklisting the performers from the soft-core industry. There’s also a secondary plot thread that deals with staking a particularly nasty vampire coven taking root in a populated area of Chicago.

If you’ve read previous entries in The Dresden Files, then this one will be a similar ride through the urban fantasy that Jim Butcher has created. It’s got the snark and humor from Harry Dresden, the ball busting matter-of-fact nature of Murphy, and more interaction with Kincaid (the Hellhound) from the previous book. Kincaid and his additional dry snark is a welcome addition to the characters. The dialogue between him and the other characters really play well in conversations.

Overall I enjoyed the book. There were a few moments, as in the previous entries, that I feel are overused or out of place. Such as worrying if the police are going to come after Harry, yet again. I think this “threat of police action” has been used in every book and it could be dumped from the stories. There are some one liners from Harry that again seem to be out of place for the situation he is in. The villain is once again, more fleshed out in the end. There is very little interaction with the villain in earlier chapters and it comes as more of a coincidence that this is the actual villain. It feels more like it is done to tie a secondary plot thread together. The ride through is always more thrilling than the wrap up, but I digress.

Don’t get me wrong, all books have issues. The Dresden Files are definitely worth checking out and are a thrilling read. The pluses by far outweigh the minuses. I wouldn’t be up to and through with book 6 if I wasn’t on the ride until the very end!