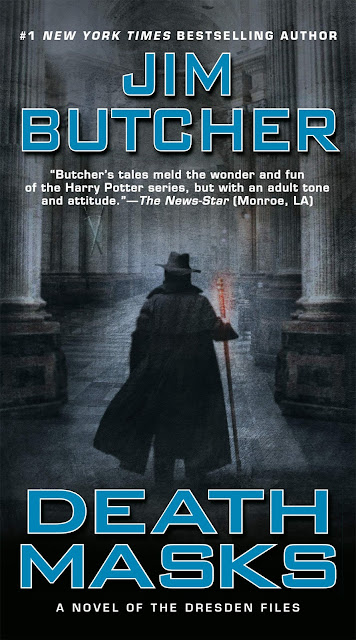 Death Masks moved much better than Summer Knight in my opinion. The story was more cohesive and streamlined, even though you had two events taking place, it just felt much better. Plus, Michael returns in this book and that is a character I really like. I always see Gerard Butler in my head when Michael is in a scene.

The Premise: The Shroud of Turin has been stolen and it is up to Harry Dresden to find it. However, he also has to deal with a vampire from the Red Court that has challenged him to a duel.

I love that the story moves quickly and the pacing is darn near perfect in this book. I also love that both Susan and Michael are back. I love that Nicodemus (I see David Tennant in my head for this character) is a new opponent and so far, he seems like the best villain Dresden has had. I hope to see much more of him in the future books.

I was glad that the police weren't after Harry... much... I was worried there for a minute because it almost went that route but it moved in another direction. I'm so tired of the police always being after Harry. I hope that police being after him is a trope that has finally been discarded for the rest of the series.

I was also happy to see that Harry wasn't too beat up at the end. He was still beat up enough that it kind of annoyed me. It seems like he is always beat up at the end of every book and... well... been there done that. There are other ways to finish off a tale. Hopefully the books ahead try to use some of those other ways.

All in all... I enjoy the book a lot and I look forward to Blood Rites.