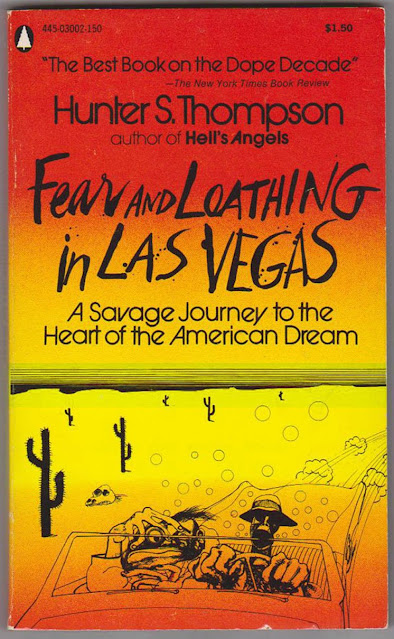 The prose are like music and poetry combined. While I'm not really on the same side of the fence as Hunter S. Thompson, I could read his words all day long. Fear and Loathing in Las Vegas is a MUST read for any Thompson fan.

The Premise: Raoul Duke (Hunter S. Thompson) and his attorney are sent to Las Vegas in 1971 to report on the  Mint 400 motorcycle race in the desert. So they load up their rented "red shark" and take every drug known to man, with them on the trip. They're also in search of the American Dream, to find out what it is, and does it still exist.

This was a reread for me, as I originally stumbled upon Thompson's work via the quite faithful adaption of Fear and Loathing in Las Vegas starring Johnny Depp, who plays Thompson perfectly. Thompson is also in a drug induced cameo scene in the movie. Depp talks just like Thompson. I started to watch interviews of Thompson and his inflection and way of speaking is exactly how he writes. So when reading his words, you can't help but hear him and read in it his style. It's a really great enhancement of the reading experience.

The book is created by scenes that don't necessarily tie together, yet they still make up this great tapestry and journey that the reader is taken on. It's interesting to note (as I've found in the interviews that I've seen) that Thompson was not really a fan of journalism in the norm or the press (he wanted to be a novelist from the beginning). That's why he is known for his Gonzo journalism that places himself in the story and speaks through his interactions with the story itself.

As I've said elsewhere, Anthony Bourdain was heavily influenced by Hunter S. Thompson's writing and journalism style. He had credited Fear and Loathing in Las Vegas as having made a huge impact on him.  Sadly he also left this Earth by his own hand as well. You can't really argue with the greatness of a book when other modern day greats were impacted so much by it. This book is a great book and fun read.