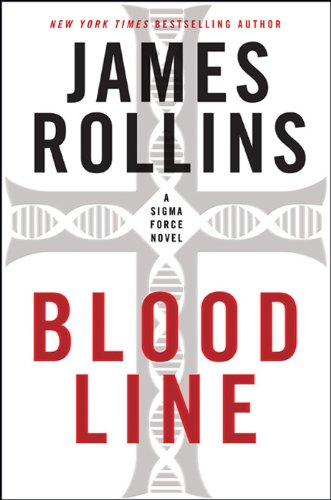 Bloodline is a pedal to the metal action adventure that takes the hidden clues and secrets of prior books to offer up a payoff for the reader. Who are the guild? What are the intentions of the guild? Ho does the President fit into all of this?

Normally in a Sigma Force series book, you get something old and historic crossed with something new and science tinged. The two meet and James Rollins weaves a tale to combine them. While this entry somewhat had that, it was first and foremost an action first undertaking.

The Premise: The President's daughter has been kidnapped and Sigma Force has been called in to undertake a rescue. The guild appears to be behind the kidnapping. They are trying to make their centuries long quest for immortality for the bloodline to come to fruition with genetics. Can Sigma Force save the President's daughter or will they be defeated by cybernetic machinations and the ultimate shadowy secret society?

It's not until much later in the book when the guild's plans get fleshed out through deeper conversation. Until then, it is a lot of the action and adventure of what is happening. While I enjoyed the book, I did feel the pacing was thrown off by not peppering more of the conversation throughout. We have the mystery of why the daughter was kidnapped but it gets strung along until closer to the end. Another thing that somewhat bothered me was the various team members getting caught, escaping, and getting caught again. I think this could have been played out differently.

Again, this is not to say that I didn't like the book because I did enjoy reading it. It's the culmination (to a  certain extent) of why the guild is doing what it has been doing since the beginning of the series. So it is a must read entry on that point alone.