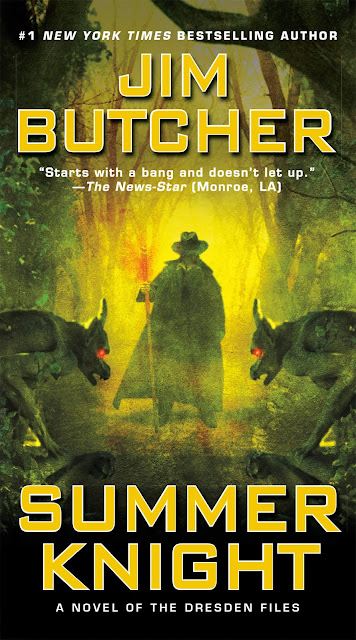 After coming off of The Fall of Hyperion by Dan Simmons, Harry Dresden is a good light palate cleanser. It's light reading, goes fast, and has a focus on humor and action. With Summer Knight, we get a big focus on humor in this one. More so than in the first 3 books even. There is a lot of action too. If this were to be compared to a movie, then it would be in the vain of Thor: Ragnarok.

This may be the first Dresden book I've read where I think it would be more suited to a high budget movie than a TV series. I mean, you have a massive faerie war that take place here. Horses thundering, centaurs clomping, and ogres hulking out. This was a small story on a big stage.

The premise: The Winter Queen has "asked" Harry to find out who killed the Summer Knight to clear her side from an impending war.

This was a bit of a sticking point that I was not fond of. You have the Summer faeries vs the Winter faeries and a battle for control that will break the seasons on Earth. However, this means that the control of seasons and power comes down to Chicago and the time zone Chicago is in. There's this whole thing about one side taking complete control at midnight of the change and it would have an effect on the entire world. This ignores the fact that while it may become winter in Chicago, it would become summer on the other side of the world. The balance would still be there, unless Chicago was just the main focal point for the entire planet. What happened to Greenwich Mean Time? I mean... stick Harry on a plane and make him fly to an actual nexus. I digress...

There's a good back and forth between Harry and Karrin Murphy. I'd actually like to have more between them and even Harry and Billy the werewolf. The moments of discovery and characterization were short and in the background on this one while the action and humor were center stage. Most of the humor works but stuff like Harry doing the Roadrunner (Meep Meep) kind of fell flat. That happens at a moment way too serious.

All in all it was good book. Worth the read. Death Masks (book 5) will be the next title in my Dresden rotation coming up later this year. I'm excited for this one too because Susan Rodriguez should be showing back up and we'll see where her character is at ( somewhere between human and vampire).