Friendship in the Age of Politics for EVERYTHING 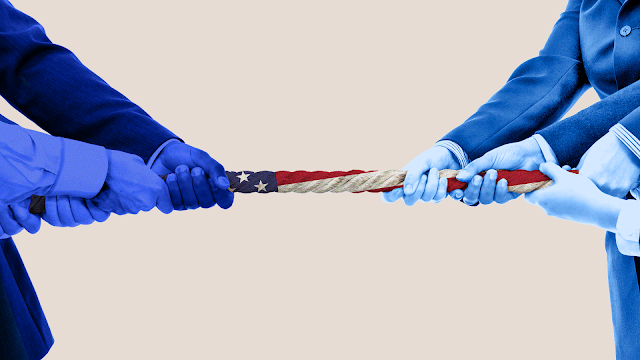 I guess the IRL (In Real Life) friendships are being tested now. With politics infecting everything worse than a Covid-19 surge, longtime friendships are being tested and taken to the limit. Case in point, 2 of my long time friends have both taken opposite sides to my middle and moderate position. One going far left and one going far right. So much so that one ghosted me already and the other only responds with one word replies to texts. Apparently me, being in the middle, with logic and reason doesn't fit either far removed side of thought.

Let me be clear about something. Both are friends from way back. One from high school and one from middle school. The one from high school was the one I went to concerts and shows with every other week in my 20's and then here and there through 2016 or so. The one from middle school was never political until his girlfriend changed that and took him left. Now it's 2021 and politics defines your life much like skin color or what you have between your legs. If you don't fall in line, you will be ghosted or canceled.

My friend from high school seems to have ghosted me over not ditching Netflix when they started streaming that movie Cuties (a movie I have not watched and have no desire to watch). I made it clear that I had no interest in that movie but wasn't going to jettison Netflix based on just that movie. As a matter of fact, the people who keep the service but never watch the movie, probably hold a bigger sway over programming than those that ditch the service with the latest mob condemnation. This friend was going far right on me. Apparently, my keeping the service was a bridge too far. So he actually BLOCKED me on various social networks and then no longer replied to any texts or phone calls. Just like that... a 28 year or so friendship was void.

My friend from middle school, who was never political, has been taken left by his girlfriend. I had not known that she was this political but it seems to flavor his way of thinking. If she votes left, then he will vote left. Not much thought in it, happy "wife", happy life, I suppose. When I used to mention something to him before regarding politics, there would be a bit of a discussion where I could explain my point but now... It's silence. I'm not completely "ghosted" but you can feel the tension in the air. He thinks I'm "far right" when I'm still a dead center, middle, moderate leaning, libertarian. The Overton Window has shifted so far to the left now that the middle and moderate look far right to those on the left. When I try to leave politics completely out of it, it can be like old times, and that's what I was doing, until he inserts something that his girlfriend believes to get a response from me. If I elaborate and take a position, all of a sudden I'm in the wrong. That's a no no. You can not have an alternate opinion.

Sadly, there is not much I can do in either matter. 30 year friendships that become the Titanic because people can't have different opinions. People can no longer think for themselves and must be fans of their political team in full. Their team and side can do no wrong. It's absolute of nothing.

I'd prefer not to be lectured to by either side. But with the above dynamic, that's the only road I'm allowed to take. So instead, my only course is to go about my own life and not interact with those that cannot take interaction or differing opinions. Already easy for the "right" friend because that's been voided already. Why should one person get to say their position but then hold up a hand when I begin to say mine? Both friends were the ones goading me. That's the really crazy part!!! In both cases, it was them bringing up the subject, whether it be Cuties or Q or getting vaccinated. My responses were not in-line with their absolute stance and so, that cannot be allowed. Gee... Thanks...

This is the sad state of America these days. Free speech be damned, differing of opinions be canceled, and friendships only allowed if you believe in absolutes and partisan sides.