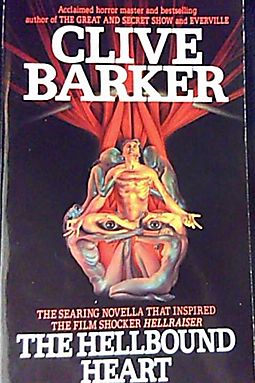 The Hellbound Heart is the template and source material for the movie Hellraiser. The movie doesn't stray too far from the Novella because Clive Barker also wrote and directed the movie. The only real differences are that the Cenobites are "fleshed" (pun intended) out more in the movie and Kirsty isn't Larry's daughter but instead is a friend. Larry in the novella is actually Rory. The Engineer from the novella may or may not be the bum that eats crickets and changes to a demon at the end of the movie (I'm not sure on that one because he isn't named in the movie and Pinhead takes the lead there).

The Premise: A man goes looking for pleasure and experiences beyond belief and finds a way to call the Cenobites who make no distinction between pleasure and pain. When blood spills after his death, he is able to find his way back into the real world to escape the Cenobites, but that requires more blood and bodies to be whole.

I've probably read the novella a half a dozens times since I first bought the book in the late 80's. It's a quick read that now leads into Hellraiser: The Toll by Clive Barker and Mark Alan Miller, which is followed by the The Scarlet Gospels by Clive Barker. Since I haven't read those two, I dived back into a reread of The Hellbound Heart to do a straight through read of all three.

If you enjoyed the movie and like to read, then you will enjoy the book. Clive Barker's prose and dialogue are always a joy to read. Even the ever so gruesome and vivid details of his macabre descriptions. It flows like poetry.