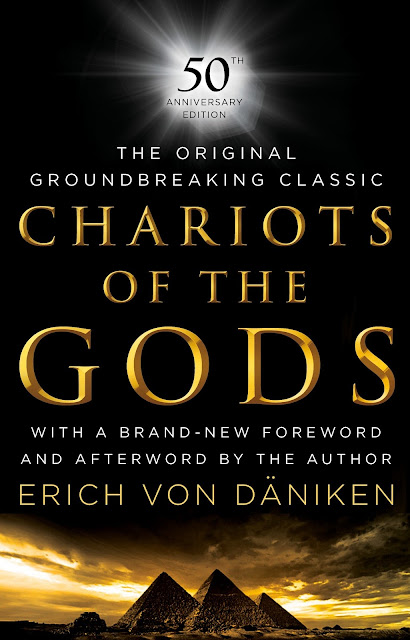 I’m reading Chariots of the Gods and it is turning out to be a real highlighter filled book.
While reading it, I started thinking about how people get so set in their status quo that they refuse to believe anyone else and then to the detriment of science, new findings, new research, ignore everything to continue being closed off and set in their ways.
The “Woke Scourge” today mirrors the Religious Right of yesterday in how they operate. While the religious right are more about keeping to themselves these days, the Woke are trying to push their intolerant and narrow minded views on everyone. And if you do not listen, they cancel you and shut you down like that of the Salem witch trials.
I don’t get into religious debates often because I just don’t care. If a person wants to be religious, then have at it. Honestly, if a person wants to be Woke, as long as they are not forcing their Woke viewpoints on others, then go for it. It’s when either side crosses the line and decides they have a holier than thou mandate that I take issue.

I find myself on the side of some of those who are religious when facing the Woke Scourge. However, at the end of the day, I don’t turn back to my own little status quo. The mainstream religious, archaeological and historical for ancient times, are in effect doing the same thing as the Woke in modern times. They refuse to view, see, or take in new findings, research, or found history because it does not fit their narrow view. For the last 50 years or so, the mainstream religious, archaeological, and historical have refused to look at any evidence that changes their religious texts or historical timeline.

Some very basic things cannot be denied:
- Interpretations and translation of the Bible (all current in use) are known to be incorrect.
- The Church restricted certain books from being canonized because they didn’t fit the narrative (sounds so Woke!!!).
- There is overwhelming evidence that the angry vengeful God of the Old Testament is not the same as the caring God of the New Testament. In fact, most of the old Testament stories can be found to have been translations of Sumerian religious texts. From Noah to even aspects of creation. Stories of the flood can even be found in ancient South American texts. The story with Noah’s name inserted, comes much later in the timeline than these far older stories.
- As Kirk said in Star Trek V: "What does God need with a starship?" In the Old Testament, God is using vehicles an awful lot. We know that omnipotence would not need the use of any vehicle.

These are just a few inconsistencies out of many that the mainstream refuses to acknowledge. Why wouldn’t religious people who are staking everything on faith, not want an actual translation of the words they place faith in? Why would they not want to see books that have been omitted, yet were found next to and with the books they place faith in?

If it were me, I would want all the information yet religion and mainstream history refuses to even view any new discovery. They act like the Supreme court in their refusal to view the evidence of election fraud. They know the facts are there but do not want to see it because it will change their world view in some way. That frightens them.
Even if none of these things have anything to do with Ancient Astronaut theory, they are still bullet points the mainstream would rather ignore. The narrative that was built for them is no different than the Woke and modern day mainstream media building a narrative that ignores everything that they don’t want to see.
Humans should not claim to be enlightened when they refuse to see new evidence. At the end of the day, humanity refuses to step outside the status quo of whatever narrative they have chosen to believe.
Ancient Aliens Chariots of the Gods History Mainstream Media Religion