How to SAVE Comics from Continuity and Generational Divides

I for one am sick of retcons to deal with continuity in a comic book universe. I'm speaking mainly of the Marvel 616 and the DC universe. I'm tired of characters being changed to fit some progressive activism. I'm tired of gender and race flips being done for no reason other than to satisfy the egos of activist writers. It's all so tiring... 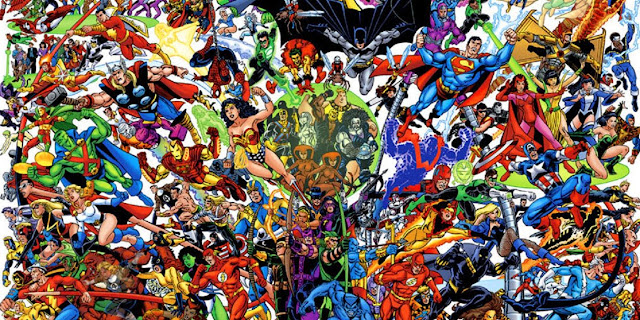 - Let the writers come into the bullpen and plan an overall arc for the 10 year run. A beginning, middle, and end.

- All characters are completely rebooted every 10 years.

- New origins and new characters can be utilized and drastic changes made.

- Lead up to something huge at the end. Have a goal to work to.

- The end, is the actual end. Nothing carriers over into the next new decade.

What this does is allows generational arcs where people can (and will) collect everything in that arc. People can jump onboard and that 10 year span is the span that they hold dear to them. Later on, they may read a 10 year span they absolutely don't like or agree with so they have the option of going back and buying and collecting everything from the decade span that meant something to them. Or they may be intrigued by another decade and then see value in collecting that entire decade too.

New readers could jump on for current decade spans. They get excited, they end up collecting more from the decade they love.

That way, if you no longer want Peter Parker as Spider-Man (why??? I digress...) there may be a decade where he doesn't even appear and only Miles Morales is around. I as a huge Peter Parker Spider-Man fan  and I have decades of past comics that I can pick up and enjoy. I may not buy into the current decade arc but others will. Later on in there life they will have an entire decade of memories they can look back on. They can even collect more titles from that decade that they didn't pick up at the time when they were collecting. They can continue to fill out the decade long story arc that meant the most to them.

This gives the writers more freedom with creativity, the readers more options to buy in and collect, and fixes the need to constantly retcon, reGender, reRace characters in current continuity. It also may increase the value of certain comics from certain decades that become wanted and sought after over the years. It's a win win for everyone.

Also... Comics become a time capsule for that entire decade. One can read them and see the technology, grammar, styles, and so much more being used at that particular moment in time. That should be saved and preserved as apart of our history.