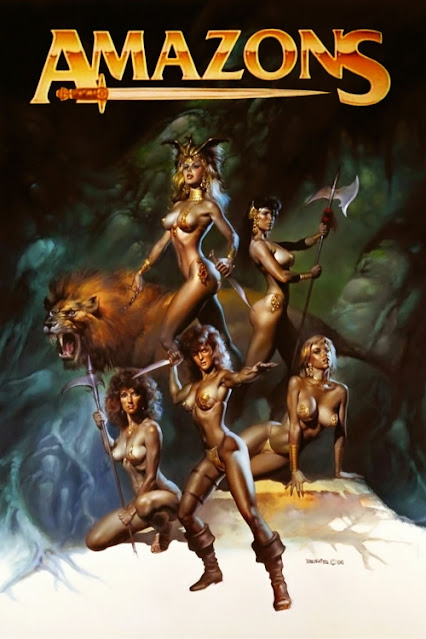 Amazons is a timeless tale from the dark ages. Warrior Women want to live in peace but an evil wizard wants to rule the land. The evil wizard has the power of lightening from his fingertips and the people have no chance to hold back his evil oppression. So what's an Amazonian warrior woman to do?

First, the leader of the Amazonian's must put together a small sisterhood to go on a quest for a mythical sword that can defend against the evil fingertips of the oppressive wizard. Along the way, warrior women will bathe, save other nude women from being eaten by a tree (or something), and ultimately find and wield the sword that shall free them all. Oh yeah... I can't forget the naked woman who transforms from lioness to human. Props given though... She wears a collar in both forms, clothing does not magically appear like in so many other flicks with transformations. Teased hair does appear though.

The effects are all practical outside of the cartoon lightening from the wizard's fingertips. You have to give him credit, he can shoot straight up and it will always find the cart of hay that will be the target in the next scene. Costumes are your standard bikinis for the Amazon women and black robes for the evil wizard. The ultimate sword looks like it was made from Coca-Cola cans. This sword probably cannot cut. It definitely cannot kill, though there are decapitations to be seen here. 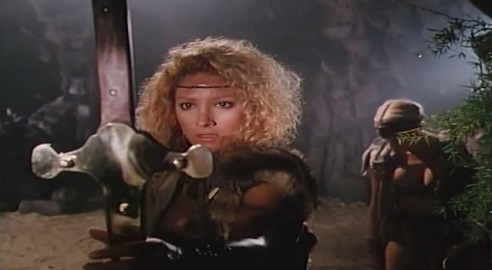 This is a true low budget 80's sword and sorcery T 'n A flick (made in association with Roger Corman) that you would run across late at night on one of the third rate channels and just have to watch. It's mindless entertainment. It also has what amounts to 3 places it could have ended but kept going. So did Peter Jackson watch this before coming up with the ending to The Return of the King??? Maybe...