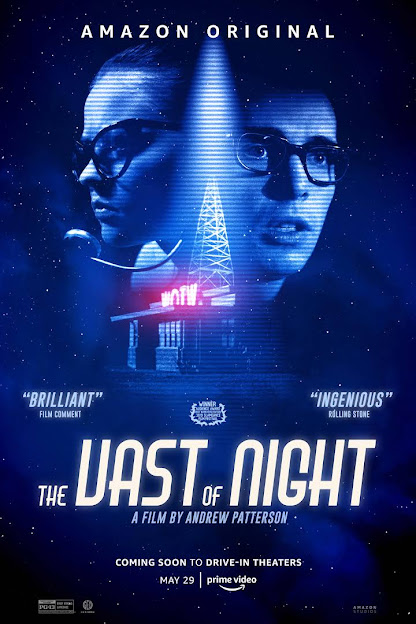 The Vast of Night is a low budget but high quality alien thriller. When a 1950's radio DJ and a switchboard operator find a sound messing with their signal, they go looking for the source and anyone who has also heard that sound.
The movie doesn't revolve around big action scenes or major reveals. Instead, you get these really well crafted personal stories being told by people who may or may not know what is going on. Words move the story forward and when these stories are being told, you find yourself hanging on the edge to hear what happened next. That's the mark of a good writer and an excellent screenplay right there.
Some may not like the ending, as this is another one where explanations are left to the imagination. For an alien flick talking about abductions, that works. It's a bit slow to start but if hold on and keep going, it reels you in and leaves you with a nice unsettled feeling in the end. Odd to say that that is a good thing, but it is an effect that works and it makes the movie all the more memorable.
Alien Abduction Amazon Original Movies The Vast of Night Thriller