Society has an Attention Deficit Disorder

July 10, 2020
Society lives in headlines, 280 character Tweets, memes, and 30 second soundbites. This is how society gets the news. Any long form, well thought out written piece, is never completely read anymore. Society is truly an Idiocracy and makes no excuses for being a hive mind of dumb people.
I can write this, because if anyone bothers to read this blog entry, it will be amazing. I write long pieces of well thought out material on Medium and it's almost always crickets these days. The funny thing, I'll share those pieces out on social media and people will like them there. Hey people???!!!??? I can see stats in real time and know you are not actually reading the articles. All you are doing is liking a headline that is in line with your belief system. This also tells me that the same thing happens on both the right and the left of political identities. I'm sure it happens in the middle too. 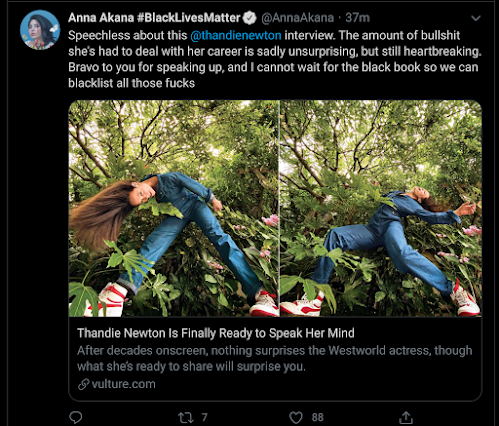 Take for instance, that long interview with Thandie Newton this last week. It was a good interview. However, no one, not even the media, seems to have read it. They picked out pieces that were out of context, like "she was scared of Tom Cruise" (it was more intimidation by a big time actor that she admits pushed her to do better), or she has a "little black book of casting couch tails that she won't release until after she someday passes away," (not an actual written book, and she's not being vindictive). However people were saying that they can't wait for her to release it. What? Did you not read that she said she would never release that information while she is still living??? Are the "fans" demanding she die now??? No... they are just fools who didn't bother to read. They took in the headlines and Tweets and then spoke on things they didn't have the whole story for. That is society in a nutshell... a bunch of know-it-all's who know nothing because they never get all of the information.
This is why man mad climate change can easily be passed off as real, why this entire "you can choose and identify your sex/gender" junk is so popular, and why people can be canceled so easily. No one reads the facts of anything. No one cares to get all of the information. We have tons of biological science books out there but you idiots actually believe you can just choose to be something else??? Talk about science denial!!! READ A BOOK (and not some psychology nonsense that is all mumbo jumbo).
I really don't know how to get my words out there. I have a couple of popular articles on Medium but by no means the ones I expected to be as popular as they are. A bit of dumb luck I suppose. Otherwise, between those articles and this blog, it's like writing to the universe and maybe, just maybe... someone will wonder by and take it all in. Now if I did memes... I'd be a superstar!!! But I don't. I write these long editorials and such, filled with logic, cause and effect, facts, and common sense. None of that is actually in favor anymore.
Is it any wonder that society is in a nosedive? When no one bothers to read things, to understand nuances, to be informed, then they are just making knee jerk reactions to half-asses understandings. Sadly, I see this getting much worse.
Idiocracy Media Society Writing