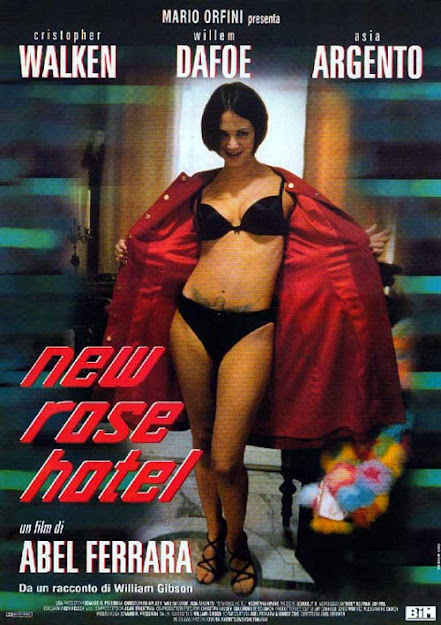 It's been awhile since I've seen New Rose Hotel (the last time was on a videocassette I bought at a Hollywood Video WAY back in probably 1999). I've read the short story by William Gibson a couple of times since then and the premise of extracting a scientist from one company to another is till there. Willem Dafoe and Christopher Walken play two corporate extraction agents that are trying to pull one scientist out of one company, for another. They're plan is to have him seduced by Sandii (Asia Argento) so that he will willingly leave his current employer and his wife.
The story is about the people pulling the strings (or so they think) and doesn't follow Sandii as she seduces the scientist. So you get the plans, the updates as to how everything went down, and then the effects of what happens from the seduction and defection. As in the short story, it's a dialogue first thriller pseudo mystery and not a feet on the ground action thriller of "will she be able to make it happen." 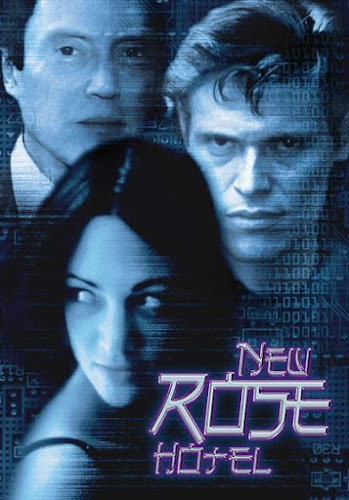 I enjoyed the movie more this time than when I originally viewed it. Maybe that is because I had read the short story after seeing it the first time and now I can appreciate it much more than before. If you are a fan of William Gibson then it is a must to check out. His books can be very hard to grasp for the lite readers out there so creating movies that encompass his meanings is a task for any writer and director that takes on the job (see Johnny Mnemonic - also in the same book of short fiction as this). You have to put clues together and flesh things out for yourself sometimes instead of having it handed to you. I like that.
There are elements of cyberpunk in the technology you see but for the most part it happens in a future version of 1999 or so. Just imagine timelines splintering before the internet became the social media mess that it is today. If you have Amazon Prime, then you have Amazon Video, and that is where it is streaming, so go check it out.
Cyberpunk New Rose Hotel William Gibson