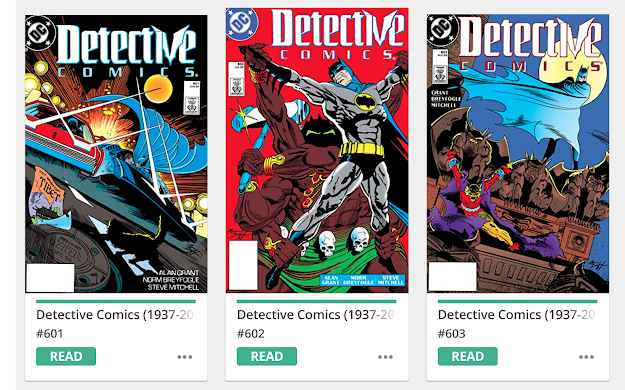 This may be one of my favorite Batman three issue arcs/stories right here. It wasn't world shattering or momentous. These are three issues from the late 80's which I also own in physical form too. I recently re-bought them on ComiXology in digital format just because, in all honesty, digital comics look better. The colors are bright and pop vs the old comics that have dulled colors on the pages. I read for the stories, not a misplaced notion that they would some day valuable. Most modern comics will never hold much real value. (All purchased ComiXology comics can be downloaded and saved with no DRM by the way).

Anyway... this is just a story of a man that is in deep over his dad's debt and is able to create ghola's to do his bidding. It's a straight forward story where Batman ends up protecting the mob trying to hurt the guy because the guy has created a monster to kill them. Also, this was my first introduction to The Demon Etrigan (seen on the cover of #603), who speaks in rhyme and has ever since been an interesting character.

There was no SJW morality pushes here. No holier than thou lecturing. No attempt to bring the real world current affairs into the comic. It was just a straight up good story. I miss that in comics. Too many comics today ignore a good story so that the writer/activist can infuse whatever their beliefs and causes are into the narrative. That doesn't make a good story. That's just an activist who is a pop culture missionary pushing their skewed beliefs on the reader in order to persuade. Sadly that is the norm in modern day comics now.
So if you want some really good comics, go back into the back issues and check out issues from the 80's and 90's. You can still enjoy those stories and have a good time reading them.
back issues Batman Comics Detective Comics Pop Culture