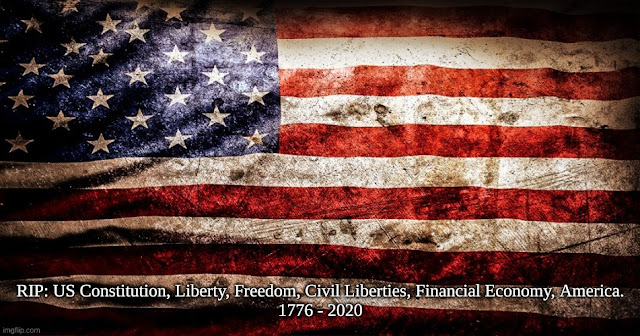 If that isn't the biggest Aprils fools day slap in the face, then I don't what is. Sadly... I have to mark this day in history as when America passed on. More cities, counties, and states usurped power from the people and mandated that healthy individuals "shelter in place" from the Covid-19 virus. The FACT is, none of these governmental agencies have the power to do this. The most they can legally do is force those who are infected into quarantine. They cannot turn it around and say healthy people must quarantine. My particular county is threatening fines and up to a year in jail for not obeying this law they have no power to implement. They have no legal power under the Constitution to implement it but they have the guns.

Not one local to state representative, or anyone in the media, can point to any law that gives them this power to force people to stay home. The reason, it doesn't exist. States and localities are making up illegal laws, while police will now illegally enforce those laws. That's basically the end to checks and balances in government and an end to law. This becomes precedent to locking people up for whatever reason is created the next time. The people walked right into allowing it too. We're all peasants now. If you wanted anymore reason to distrust our media, here it is... No one is asking where these oppressive powers in government are derived form. If they can ignore the Constitution for this, then what else will they ignore for down the line??? And all of you people that are for shutting everything down are complicit in this.

I know this virus will kill people. We lose roughly 10,000 to 60,000+ people yearly to the normal yearly flu. We don't shut down the economy then. This is ridiculous. The amount of people who will die or suffer in the long run from an economic collapse makes any number of deaths from this virus pale in comparison. You will have more crime, robbery, domestic disputes, arguments over money, and so on and so forth. The number one argument is always money and you will see mass unemployment getting to people. You will see killing and suicide rates spike and the data that this does happen is out there. Shutting down the economy is reckless idiocy on any level!!!

I'm angry, confused, and annoyed on so many levels right now because this was supposed to be America, where our liberty and freedom would always be core and mean something. Yet now we find it means nothing to those in power and nothing to a majority of the sheeple underneath them. All of those people out there on social media that were demanding these illegal "shelter in place" actions take place, this is all on you too. You had a very big hand in adding your voices to the echo chambers and bringing forth the great economic collapse. You will end up causing much more suffering and death then this virus does.

And just as I am writing this, the Governor (Kemp - R) of Georgia is issuing a state wide shelter at home order. Of course... not one representative of government or member of media can answer the below question that I have replied on numerous Tweets they have released: 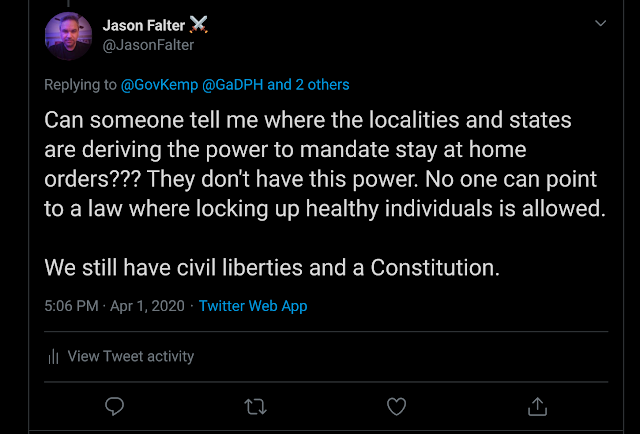 Can someone tell me where the localities and states are deriving the power to mandate stay at home orders??? They don't have this power. No one can point to a law where locking up healthy individuals is allowed.
We still have civil liberties and a Constitution.

This of course is ignored. Should I happen to be disappeared... This would be why. Rocking the boat. Why should we have free speech either... right???

Here is the law being singled out in Georgia for use with the lock down (CLICK HERE). The way the law is being read is a gross misrepresentation of how it was written. An infected person can be quarantined, but the way it is being read is that it is assumed that all citizens in Georgia are infected. That is clearly NOT how it was written. That is clearly unconstitutional. But again... the crazies in power have the guns. I can only hope that the state, counties, and cities that participated in this overreach are sued. Granted, the tax payer will end up paying for it but at this point, most of the public is as dumb as a pile of rocks where Constitutional law and process is concerned. I'm fairly certain most failed Civics 101.

Anyway... It was around a 244 year experiment in liberty and freedom and it has now passed on, as well as the worldwide economy that was dependent on it. I honestly can't look at politicians or members of media the same way again. I also don't trust most of those who lied and said they were pro-Constitution but sold it out when the chips were down.

Rest in Peace America. I'll truly miss what you were and what you could have been. And as a parting word:

“I wish it need not have happened in my time,” said Frodo. “So do I,” said Gandalf, “and so do all who live to see such times. But that is not for them to decide. All we have to decide is what to do with the time that is given us.”
J.R.R. Tolkien – The Fellowship of The Ring 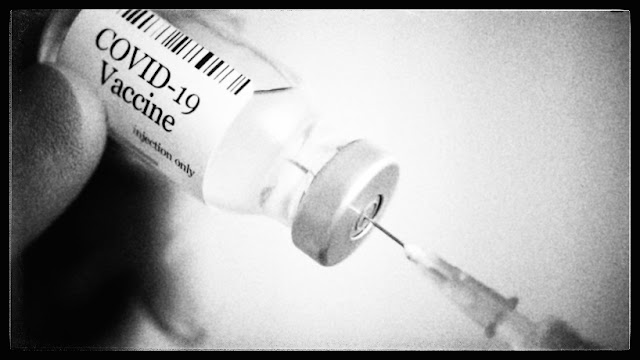