March 21, 2020
The road to sanity is paved in memes. I say this because the world has gone insane. Who shuts down an entire economy for something that has taken less lives than the yearly flu? The hype is off the charts on this one and social media is now a prime method to spread the politicians and media message of hysteria. Since everyone is basically locked away at home, those messages spread like a bush fire. 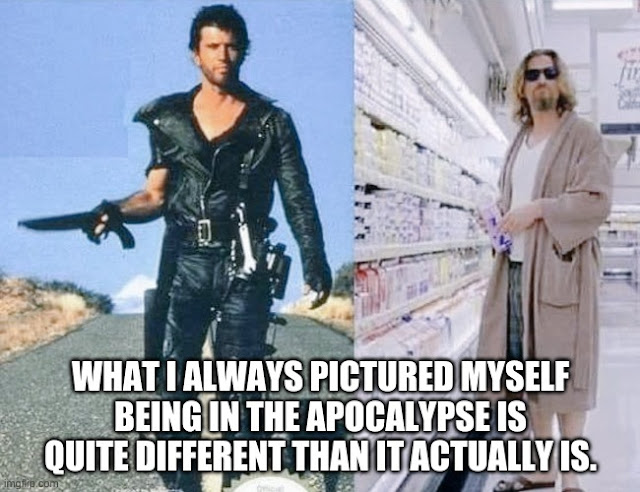 So I made the above meme yesterday because at this point, all one can do is have some fun in the face of this grand idiocracy. A person on Twitter (@MariettaDaviz) had posted the picture and then in the body of the Tweet wrote the words. I simply grabbed both and used a meme generator to create the one. Then I posted it out there. I'm rather happy to see people have grabbed it and started sharing it.

I think we all pretty much pictured the end of the world and the apocalypse to at least allow us to look cool wearing leather, carrying weapons, and be a bad ass... right? Instead we are all at home (everything is closed down) in our lounge clothes and wondering when the toilet paper will finally run out. Such a buzzkill on the apocalypse... 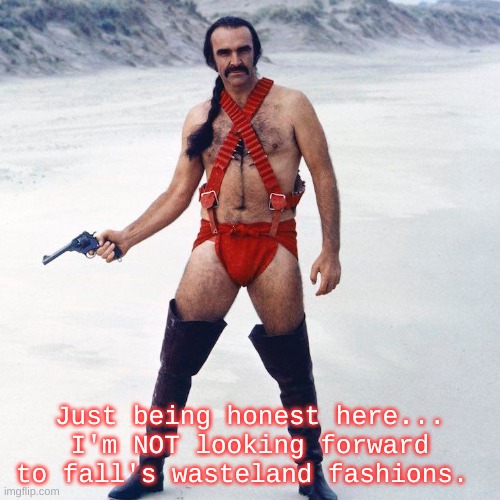 Let's also face the facts here... with the rise of Etsy, we were never going to get the cool Mad Max fashions to rove around in the wasteland. We would most likely get some fashion like that in the movie Zardoz with Sean Connery (The above meme that I also created yesterday). No one really wants to be wearing this get up so we might as well stick to the bathrobes.

I'm sure some more memes will come to me as we take this trip into the wasteland of idiocy together.