Taxation is the Ultimate form of Selfishness and Theft 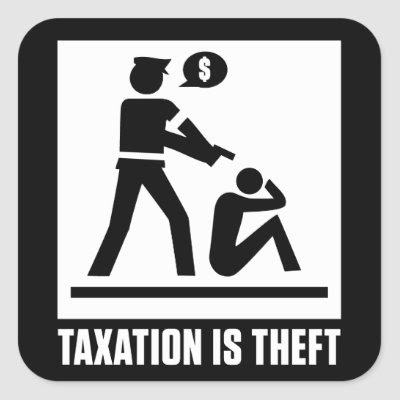 Society has a logic problem. Society believes in forcing those who earn or make money, to prop up those who don’t. If the ones who succeed don’t, then they are called greedy and selfish. Let’s really look at the true face of greed and selfishness though.

To be for taxation and raising taxes to pay for various social welfare projects YOU are basically saying that you not only want to steal and take the money that another earned, but YOU want to also deprive and steal their time, effort, and life that they spent in exchange for that money. YOU are demanding that another waste the time of their life, for YOU. Time and life can’t be added. You can’t make more of that for yourself. When it’s gone, it’s gone.

To me, that seems like the bottom of the barrel when it comes to selfishness and greed. Depriving someone of the time of their life so YOU can have more money or services for yourself.

When the left talks about having people pay their fair share, I’d like for the left to exert some effort and pay something too. The top 20% of households pay 88.1% of all Federal Taxes. So tell me again about paying a “fair share?” If you use the phrase “pay your fair share” towards those already doing more than that, you look like a total fool. The numbers don’t lie but the Democrats and Socialists sure do. They keep using that slogan and they know that they are flat out lying to score votes via misleading people into class warfare. Sadly, the people that fall for this are too low IQ to ever research the facts or truth past the left talking points. They’re also filled with jealousy and want to be angry at those that have what they don’t have. Playing victim comes easily to those who vote Democrat.

So just remember, the next time you vote for higher taxes, you are really voting to deprive people of not only their money, but their effort, time, and the hours of their life. Don’t be selfish and take someone’s life away for your benefit.