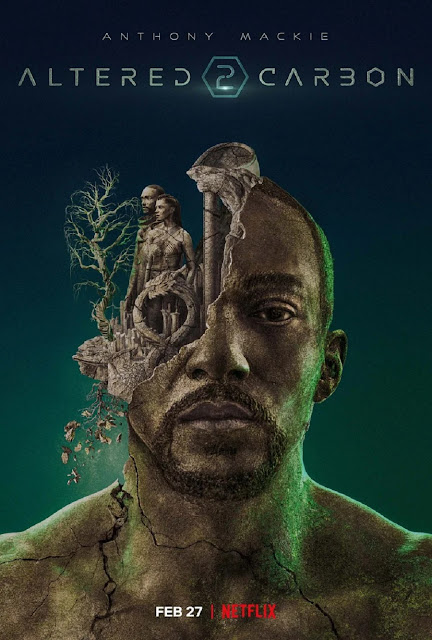 Altered Carbon S1 was excellent. For the most part it followed the book well and the new stuff written in fleshed out the world even more. Jump to Altered Carbon S2 and I’m in a state of shocked disappointment. This is nowhere near as good, interesting, or even visual as S1 was.

To start with, it doesn’t follow the next book at all. The only thing from the second book used, is that Kovacs' sleeve is that of a black man (Anthony Mackie). Gone is the military slant and the infiltration of occupied land to reach a “stargate” that will take the group to an alien spaceship. It’s just been thrown out and replaced with a boring plot that never really goes anywhere. Why would you deviate from the book???

The writing is really not up to par either. After finding out that a former CW (The Flash) showrunner has taken over, it kind of makes sense. The show isn’t very deep, stylized, or involving now. It’s surface fluff that would fit on the CW. The nudity and violence of S1 has been so toned down for S2 that you could play almost this entire season on the CW. There’s nothing here to keep your attention. Even the production values have fallen off. In S1 we had interesting sets, CGI, and things to look at. Here we have dark hallway after dark hallway. I think Killjoy’s (SYFY) now has more interesting things to look at per episode than this show. Did Anthony Mackey’s paycheck use up the budget???

The Showrunner and Anthony Mackie have said in interviews that they want to deviate from the way Kovacs was portrayed in season one. That makes no sense at all. This isn’t Doctor Who. Sure they can change bodies but their personality and mannerisms and self, does not and should not change. This is just being willfully ignorant and dismissive of the source material. When in doubt ALWAYS refer and go back to the source material

The show also uses the cliche trope of all the women being super fighters and genius level smart while all of the men get their asses kicked and just do stupid shit. Kovacs keeps getting his ass handed to him in the various fights. Several times by women and then also by a generic guard. Envoy indeed... The only time Kovacs kicks ass is when Trepp (the female bounty hunter) switches bodies with him and becomes an ultra bad ass. Meanwhile, Kovacs is in VR getting his ass kicked by Falconer. Even the bad guy is taken out at one point by the bad girl. It's just ridiculous PC SJW writing. It ignores the character of Kovacs and how he should be for a "Birds of Prey" girl power slant. This trope is so overused now and the "dude in distress" angle is just old.