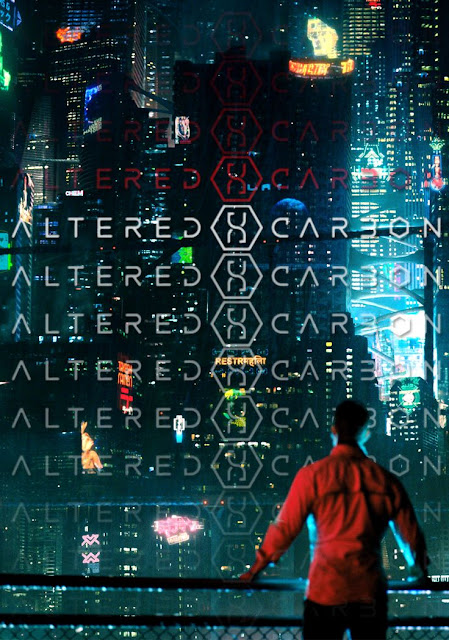 Altered Carbon on Netflix is simply a masterpiece of Cyberpunk film making. It follows the book (Written by Richard K. Morgan) fairly well, adding and changing things in certain places for the sake of the series narrative. Don’t worry… If you loved the book (REVIEW HERE) you will be VERY happy with these 10 episodes that cover it.

I believe I sat there smiling for several episodes just because I was finally able to see these characters come to life. I’m not going to go over the plot, you can click on the book review linked above, as that is the same. The characters and acting was wonderful. The sound and atmosphere through the CGI was beautiful. I’m serious when I say that this may be the BEST show I’ve ever watched on the Netflix platform. We all know Bladerunner has been the film to judge all Cyberpunk on since its inception but I do believe that Altered Carbon surpasses both Bladerunner and Bladerunner 2049 for creating a fully fledged world that is both interesting in the genre and makes the viewer believe that this world could exist. If you are a true Cyberpunk fan then you will love this show.

Strangely this is the first time I’ve binged something and I feel like going back to watch it again because it was so damn good!!! I’m beyond ready for Netflix to green light the sequel book: Broken Angels, and get that underway. So if you haven’t checked out Altered Carbon on Netflix yet… GO CHECK IT OUT NOW!!!!!!!!!!!!!!

*This Review was originally posted after binge watching the first season just a day after it originally came out on Netflix. It was originally on another blog I ran but has moved to this one.