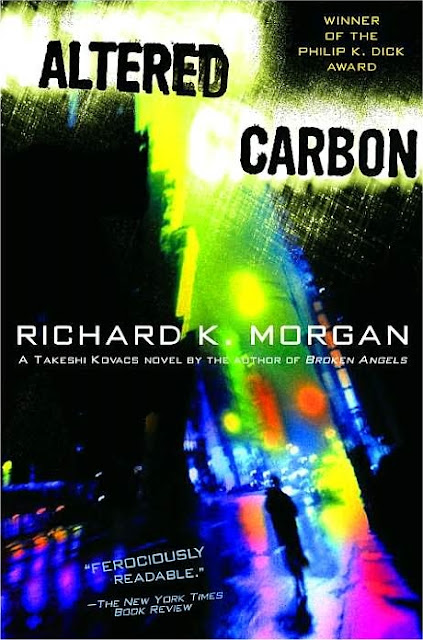 If a movie like Bladerunner exemplifies “cyberpunk” then Altered Carbon could quite possibly be THE cyberpunk template that epitomizes the genre in book form, even more so than Neuromancer.

Written in first person, we are taken into the world Takeshi Kovacs, an Asian Envoy from Harlan’s World, sent to Earth via Needlecast to be resleeved in an caucasian body, and solve the suicide/murder of Laurens Bancroft, who claims that he could not have killed himself. Sound confusing? You have to think on this one and that is part of what makes it such a great cyberpunk tale. In the world of Altered Carbon, the human body is just a sleeve. Your consciousness is actually you, and it can be placed in different bodies (sleeves). Bancroft supposedly killed himself before his next conscious backup, so he’s missing time between his death and his last backup. That’s why he hires Takeshi Kovacs to solve the what and why of his death.

Along the way, we get twists and turns that you really have to think about. I have to say, reading it though on the second pass, I knew what to look for (kind of like going back to rewatch the Sixth Sense, as everyone did, when they found the twist), so I actually enjoyed the story even more this time around. It’s a real noir detective story, and you really do have to keep up with the information that is released to you, because sometimes, those names and characters will show up later and you will get that light bulb moment of, “Oh yeah… whoa!!!”

If you like Cyberpunk, then it is definitely a good book to read. Be warned, book 2 and 3, while both good, do stray from the Cyberpunk genre.