June 29, 2019
More and more I see my use of social media tapering off. It's basically down to just broadcasting my blog and sporadic comments (and even those are falling off). The main reason, I just don't care about sharing memes, news, or mindless BS anymore. It's boring. I've also been on the internet for ages now and I know where I want to consume news from, so people sharing the news they are interested in, doesn't do much for me.

Also… people are just spiteful and nasty bastards out there. There is no nuance or civility anymore. The politicization of everything is disgusting. The disgusting Alt-Right vs the disgusting SJW's and their intolerant viewpoints from both sides is just… disgusting. If you can’t recognize your nasty intolerance then you are the problem and likewise, is you use the term, “we shouldn’t be tolerant of intolerance” then you are also the problem. Live and let live people. You can't even have a conversation on tech without some political hack inserting some political or social slant. When social media does nothing but annoy you, you kinda know that the ship has set sail, or rather, it is going down and sinking fast. 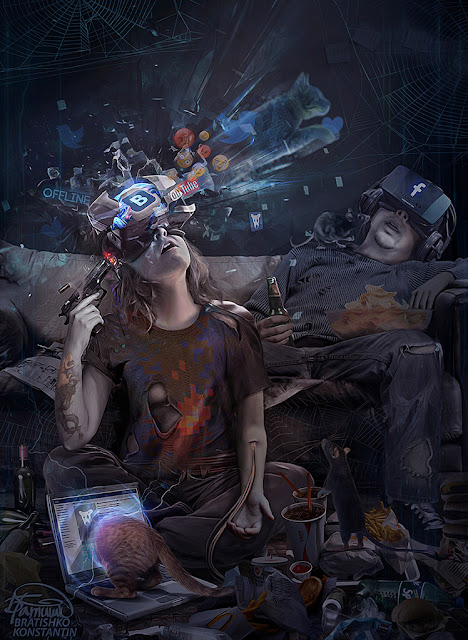 I started on MySpace, went to Facebook, dabbled in Twitter, made a good home on G+, then was forced back to the current cesspool that is Twitter and the boredom of FB when G+ closed. I then found that most of the G+ people moved to MeWe, so I'm mainly there but… throughout all of this, the same issue is there… political nonsense. Political debate online changes no one's mind, creates echo chambers, and divides everyone. We had a better chance of being nice to one another when we weren't all separated into sides.

Social media seems to have 3 or 4 main uses now
1)Political ranting
2) News curators
3) Influencers (sell outs)
4) A massive waste of time via memes, snark, and generally bad people that like to insult others.
I guess you could say that a 5th bullet point is for those sharing out their kids pics without ever asking or letting the kids decide if they want to be shared out to the masses… But I digress…

Just looking at the above list… I really have no interest in any of those bullet points. Other than some good people I've met in the past over social networking, and who I enjoy sharing and debating ideas with privately in a group chat, I don't really care about the rest of them out there or what their personal opinions are. I don't care about collecting a following either.

I used to think that a good way to promote my writing was to collect a good following of people via social media but… I proved that one wrong. Most of the people who have followed me on the social networks, rarely clicked through to the writing posts. What got responses were pictures, memes, and politics. So when I do go to sell the book I'm working on, social media wouldn't be a very good way to promote it anyway. The book may bring followers that may help future releases, but the current following are not there for my writing as it currently stands, therefore, they most likely wouldn't buy into it. That makes it a complete waste of time to throw energy at it when it's basically putting the cart before the horse.

There’s not enough time in the day to waste on social media. You are either creating and doing, or you are consuming, curating, and sharing. I’d rather focus on the creation of art and media going forward than share other people’s creations out to the masses. The people creating things and do interesting things, are NOT the people sitting on a social media platform every day and sharing stories out. That’s just a FACT.

So look for me mainly on this blog for my thoughts and such. Social media will just be a broadcast tool. Eventually, I’d like to just cut it out completely. Oh… and this is just my opinion. If social media works for you and you find it is your pass time, have at it.