My Current Tech and Media setup 2019


So without further ado…


Phone Apps used the most:


I write in Drive and then also locally on the Surface in Scrivener. I write my blogs in Drive and then transfer them over to the Blogger website because Google hasn't updated the broken Blogger app in three years and it is pretty much worthless. The reason I stick with Blogger is because I can use my own Domain there and a redirection for my personal domain email address that redirects to my Gmail account. I use Clip Studio for art and drawing on the Surface. Also, the onboard software for drawing has been indispensable for the remodeling of our house that we're doing. Countless times we’ll have an idea and I'll take a picture of that part of the house and draw out the idea over that picture on the Surface. Sometimes an idea seems good in your head but when you see it drawn out, it doesn't work. And sometimes, it works. Regardless, it has saved us money.


Point being, formly during the wretched Win 7 years (I HATE Win 7) I was ChromeOS only for my personal daily driver. Various Chromebooks up to a Pixel 2. That I have yet to have a Chromebook last over 2 years (even the Pixel 2 started having issues with the screen until it just became unusable) speaks to me of how manufactures view them as cheap and easily replaceable. Granted the Pixel 2 chromebook was REALLY nice, it wasn’t until I upgraded to the Surface Pro 4 with Win 10 (LOVE Win 10 and how much of innovation it is over Win 7) that I realized how much I was missing just being tied to a browser and wonky Android apps that may or may not work. Having writing and art programs, installed locally, has created a whole new form of productivity and entertainment.


Also, for anyone claiming that the tablet is dead… They’re full of it. This is usually done by fanboys when Google has killed off their tablet (again). iPads, Surfaces, and Fire tablets sell like hot cakes so the tablet market is NOT dead. Google just failed to crack it. Mainly because (like Microsoft used to be tied to making everything revolve around Office, Google demands that everything revolves around cloud and being non-local. Also, forcing Android to work with ChromeOS, two very different OS’s, has always been kind of a half assed attempt anyway. Google isn’t innovating because they are stuck on an old way of thinking. Google has become Microsoft circa 2006. That’s one of the reasons I branched out too. I used to be mainly in the Google ecosystem but too many sunsetted products, half assed initiatives, and beta like releases just tired me out. When I branched out, I found I could make everything work just fine and not be locked into one ecosystem and have to deal with any one companies muck ups, and believe, no company has a complete solution. I must digress… back to the that point… 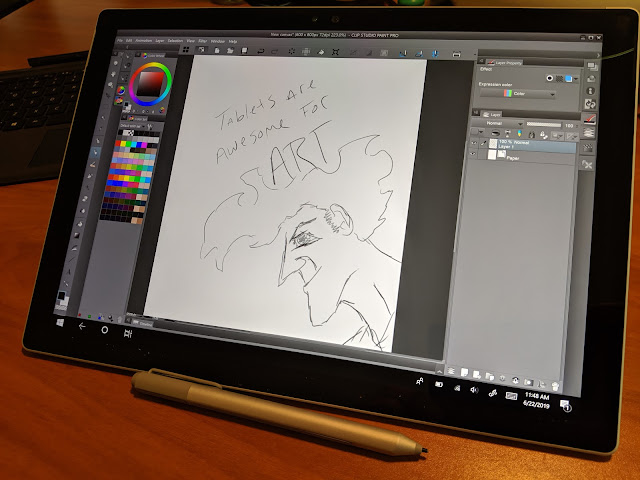 Many people from personal to job related functions use tablets daily. Basically, online I just see singular use cases of fanboys defending Google's failure to crack the market, of how they feel the market is dead. They are quite delusional though. The medical field is going more and more toward tablet over PC use. The financial field is too... People want the tablet for travel and then slap a keyboard on it and they have full functionality. You trying using a laptop for drawing... nope, it's a shitty substitute, so the art world has really embraced tablets. So when you hear one of these defenders out there for Google, all you have to realize is that they are defending from a fanboy point of view because it was a failed initiative from the company they worship. Tablets will still be huge in coming years!!! Now back to my tech stuff...


On the Surface I use both the Chrome browser and the new Edge Chromium browser pretty much equally. The same for Google search and Bing search. Bing gets me points though and the relevance is often better because there are less sponsored ads in search than what Google uses. Plus, more current links tend to show whereas Google will give you old content because it has been connected and linked to so many times before. The points I get from Bing search get me a $5 Amazon gift card monthly too. Yes people, I know about FireFox, Brave Browser and DuckDuckGo and this and that… I have no interest in changing over though. This is working for me right now. But if you like those others, and they work for you, definitely use them.


When it comes to a "smart home" we use TP Link plugs for lighting, which are controlled by voice via Alexa. Other than that, I don't need our alarm system, thermostat, or appliances "hooked in" to the internet. Just because you can make something connected, doesn't mean you necessarily should.


When gaming, I have an Xbox One, 360, and original Xbox, plus a Nintendo Wii but I rarely game anymore. No time. There is writing to be done.


That’s about all I can think of for now… Maybe I’ll do another in 2020 and see how it changes. In the meantime, use what works for YOU and remember, if you tie yourself to one company, you are missing out on better solutions all around. Plus, no one should want to be a fanboy for any company.