A Predator, a Terminator, and an Alien walk into a bar

June 02, 2019
In all honesty, Hollywood needs to just stop making movies in the Predator, Terminator, and Alien franchises. As special effects have gotten better, the stories in these franchises have just gotten worse and worse. They've lost the narrative to what these films should or could be about. 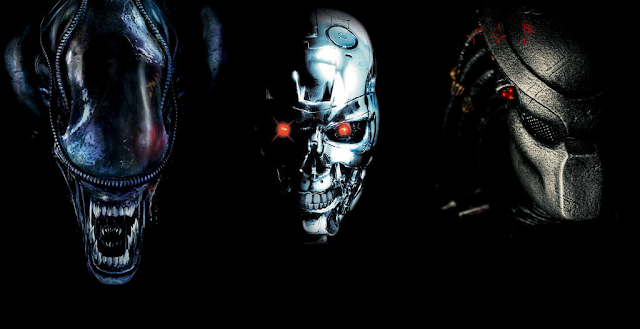 The last Predator was… I would say it was close to unwatchable. The writing, plot, and dialog was like an ongoing joke. The special effects we're bad and this is with today's supposedly superior technology. The music was forgettable. Everything about it was just bad.


The last Terminator was just going back through the first two Terminator movies with crazy time jumps. Again, the special effects were bad, the music forgettable, and the script was something where I just felt bad for the great actors who had to play out their parts. But wait… we have a new Terminator coming. This one wipes out all of the sequels and claims to be the direct sequel to number 2. Judging from the trailer though, it doesn't look impressive and then again, the CGI doesn't look good. I'll be passing on it.


As for the Alien franchise, if Ridley Scott had gone full on Engineer with Prometheus and not bothered with the Alien or the morphed human creature fight, and instead concentrated on it being an Ancient Alien space archaeology movie thriller, then he would have been onto something. However, Prometheus fell apart because he just had to add the alien and all of the crazy plot holes to get it into the movie. Scott took the failure of Prometheus for being that there wasn't enough Aliens in it and that wasn't it at all. It didn't stop him from doubling down and going back to the well for Alien Covenant, a movie that makes passing mention of the engineers (the most interesting part of the series at this point) and is all about crazy AI and that damn alien again. The alien that once again gets blown out of the hatch… Needless to say, Covenant was a failure.


It's time to lock these franchises up in a vault and publicly slap writers who bring script pitches to the studio. Enough already!!!
I really never want to see another Predator movie ever again. As far as the Terminator, if it isn't a movie that takes place after the cliffhanger ending of season 2 of The Sarah Connor Chronicles (Probably the best version of the entire franchise, even beating the first two movies), then no thanks. With Aliens, either go into the engineers in detail or just can this franchise altogether.

One problem with all three and their current sequels and reboots, is that they all feel the need to keep going back to the original movies and using tropes from each of them. We don't need that. We need new directions and new story ideas. Call backs to the original movies are just fan service and they do nothing but hurt the forward momentum of any script. Also, enough with the CGI. Let's go back to more practical filming for sci-fi instead of relying on making them overpriced video game cut scenes.


So a Predator, a Terminator, and an Alien walk into a bar and they all look at each other and think… oh no… not again.