May 18, 2019
I take breaks from social media. I'm really only on MeWe daily, but even then... I get tired of seeing certain posts. Lately it has been (will always be) political posts and then the whining crybabies who think Game of Thrones should be going in a different direction. Next month, it will be political posts and something else. The political posts are a constant so its like I need that one other subject to push me over to the point of saying time for a break.

In all seriousness though, I'm still trying to figure out why I even bother with it? The information that I obtain and then share to others because...? See, that's my point... It has no point. I really don't want to waste my time being a curator of news, media, and articles. Engagement today is nothing like it was back in the day. Today you will invariably have someone every time comment in opposition of something. It's so tiring. I don't comment much on posts I disagree with because guess what, no one has ever walked away from a debate on the internet and said, "Wow that sure changed my mind." Debate on the internet is just some form of twisted recess for the populace to get off on conflict. Humans love conflict. 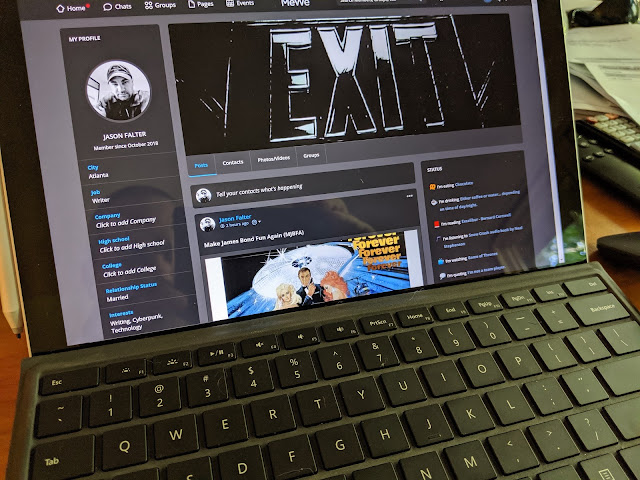 The internet, and social media in particular, is also like that game where you start with a line of people and tell the first person a sentence and then tell them to tell the next person in line the very same sentence, and keep passing it on. The last person says the sentence out loud and surprise surprise, it sounds nothing like the original sentence that was given to the first person. It's all just a bundle of secondhand misinformation.

More and more I think I should just speak here on my blog, which of course is my journal. Maybe I should only share out blog posts via social media and just refrain from using social media as a direct post route? That thought has crossed my mind many times too. It sure would weed out social media as a time suck. For one, if I don't have much to say, say two paragraphs, then it doesn't really warrant a blog entry. So theoretically, there is no point in sharing it out anywhere if I don't even find a reason to give it more than a cursory mention.

I may just try this. Blog here, share it out, and just be done with the social media independent posts. Of course MeWe is also a great chat platform so the people I currently chat with will still get direct interaction, just via chat and not as much posting.

I think overall... Social Media could have been a good thing but it ended up playing host to whiners, critics, misinformation, and popularity. It truly is a mirror held up to humanity.