The morning after the Game of Thrones finale

May 20, 2019
For me, that was a great and epic finale to an epic series that had never been done in television before. My wife and I absolutely loved it!

No spoilers here so you can keep reading. 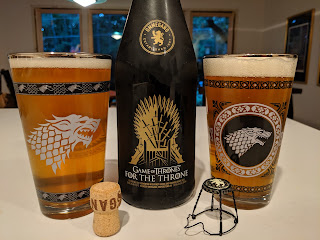 Cut to this morning and I get text messages from people who don't watch it, saying that they heard it was a disappointment, and then comments on my post for liking it, as to why someone else was disappointed. Then article after article on my news feed is negative. There are positive articles out there, you just have to go look for them because the minority of whiners on the internet are out there yelling the loudest and pushing the negative stories the most. So in other words... The normal and typical behavior of the internet.

There are a lot of people out there who think that an 8 season show should end in some action spectacle because movies end in that way. Never mind that this season had 2 massive battles within it already. This last hour and change was about wrapping it up and seeing where the characters are heading. Those waiting for some massive action sequence here really do not understand how a story is told. They have an attention span deficit or something. The final episode did exactly what it should have done. Exactly.

So for those that tried to hit me up to register their negativity, I'm more or less toning them out. Those who didn't watch don't get an opinion and those who clearly jumped on the negativity bandwagon really don't concern me. You have something so complex and deep with 8 seasons of Game of Thrones yet it gets negativity for the ending while something as insipid and full of plot holes as Avengers Endgame is heralded as the best thing ever. That right there tells you that some people have lost the will to actually follow a story. It also proves to me yet again that the internet has become a force for the spread of negativity. Negativity spreads faster than positivity, or humans just gravitate to negativity more. That's a sad thing to see. It speaks volumes on the state of humanity.

Another disturbing thing from reading some of the negativity is that people seemed to want the story to end with all the good guys being killed and tyranny winning the day. People became so used to good guys dying that after every episode, there were articles the next day titled like, "Who died on last night's Game of Thrones?" If someone didn't die, then people called it boring. Again, people have lost the point of what a good story is and in exchange they just want non-stop action, blood, and death. The story didn't fail here folks, your understanding of how a story unfolds did.

For future writers, take note. You may now edit your complexity and depth of creation down to "which hero must die" for fans to care. Make sure to make that action last until the last 2 paragraphs or last 15 minutes in order to maximize the attention deficit ability of the audience. After all, they don't care about the wrap up as much as seeing the action, blood, and death that got them there.

I know there are still those who like good storytelling out there. It's just too bad that the negative minority is so damn loud and gets so much attention because negativity traverses the internet so much better than positivity.

On another note... This really pulled back the curtain on the state of social media and the internet. I didn't seek out other people's opinions even when offering up my own but they were none to bothered to make me hear theirs. If someone really loves something and posts about it, I'm not going to comment on their post and say that I thought it was awful. And likewise, the people contacting me in the morning to make sure I was aware that those around them were not thrilled... I don't get it... Why??? It makes me want to engage much less via social networking and hold my opinions to myself, maybe just on this blog (as I've been pondering these last few weeks anyway).

I've really only got one word for social media and the internet right now: Dracarys.