May 17, 2019
The world is too safe now. Even going out for a bike ride as a kid gets helicopter parents into a tizzy. Back in the 80's, we would jump on our backs, no helmets, and head out for the rest of the day. Or rather, until dinner, at which time we would race home, shovel mac and cheese down our throats and then head back out to make the most of what light we had left in the day.
We didn't have screens of addiction back then. So we went out into the world and did things. One of our favorite things was riding bikes. Not just riding them but also jumping them over things, seeing how far we could ride with no hands, or even how far we could ride on one wheel. No helmets allowed here. Sure we took a fall now and then but what did we do? We got right back up and kept riding and having fun. 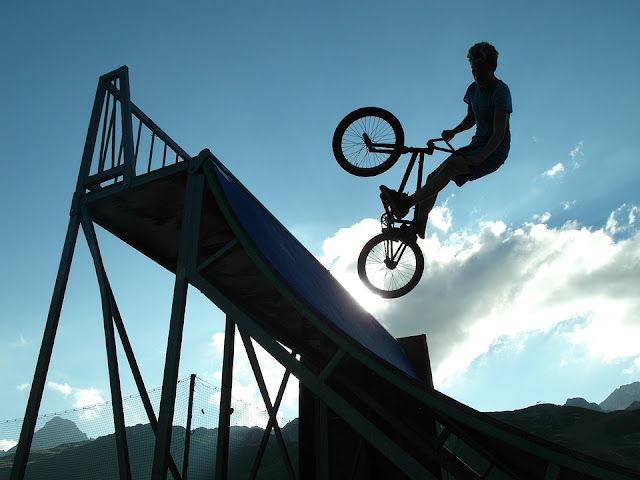 I remember a dirt mound we would all jump (I was probably 11 or 12 at the time). The mound was probably 5 feet high, so when you went off of it, you had some really good air time. I had taken a really good run up to it so I was going fast. I remember the air below me as I left the dirt mound and the rush of air past my face and then, the pull of gravity. I was coming down completely wrong. My front wheel was going down instead of coming down level. It was a split second recognition that this was not going to end well. The front wheel hit, I went forward over the handlebars, and now I was flying. Arms forward and nothing but gravel below me. It's amazing how little time can pass as you recognize something as "bad." Split seconds. I hit the ground in a belly flop and started sliding, the wind was knocked out of me. Gravel burn on my arms. And then there was another split second, "Well, that wasn't too bad." It passed and then BAM, the seat of the bike comes down hard on my back, it had completely flipped over onto me. Again the wind is knocked out of me and I'm just laying there trying to breathe. My friend rides over and is circling around me, "Are you alright?" Yep, I get up, pick my bike up and look at him and say, "I'm going to do that again and try to land right this time." And so I did.

Today, the kid would probably cry, the parents would sue who ever had the dirt mound, and the kid would be forever protected in his wussy sphere. Times have really changed.