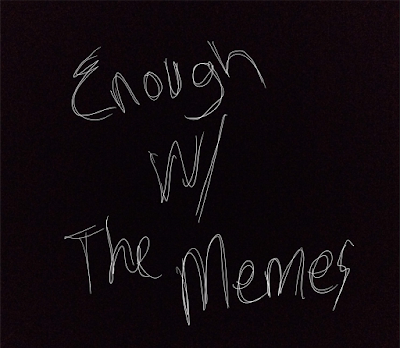 One of the worst things to happen to social media in the last 5 years was the influx of what I call, "Meme Speech," which fills the void for people who want to post something but have literally nothing to say.

We've probably all posted memes before. I know I have. Those particular funny ones that came along from time to time, make me laugh, and then something clicked in my head, "MUST SHARE," so others can have the same enjoyment I did. I recognize that dynamic now. I share very few memes at all these days. Everyone else on social media though... Try to get through your stream without seeing a meme. You can't do it. Your social stream, on whatever platform is most likely a mine field of memes.

It's as if a whole new language took over on social media that uses pictures at the forefront. Hey, this captures my thinking in a snarky way, gave me an instant sense of pleasure, or I can snark and troll with but a pic. The end result though is that people just have a NEED to post and feel central and there are a million memes out there that they can do that with. Instant satisfaction and gratification in a picture and a blurb. No need to even write your own commentary. A dumb language that is basically internet slang.
That's another reason blogs are more interesting to me. I want to open a post to a well thought out body of words, with thought put into the text, and some real information or critical thinking being pulled together. I want to read a real opinion or thought process on the subject, instead of a throw away snark that was adopted just to feel like the person is adding to/or creating a conversation that doesn't really exist.

With that in mind, I tend to ignore a majority of memes posted on the net. I'm not going lie, I'll still laugh at the funny or interesting ones, however, I most likely won't share them.