May 18, 2019
Nathan had returned from the Middle East a changed man. He wasn't exactly himself anymore, more mechanical and cold than before. His compassion was missing, as well as his arms and several damaged internal organs. The doctors said they could fix him. Make him better. Cyborg him. 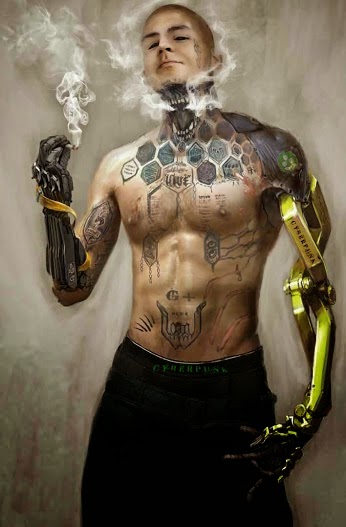 They fixed him alright. Just not his mind. His cruelty only grew with the strength now at his metal fingertips. He nearly crushed his best friends neck. All his friend did was crack a joke. With no warning Nathan's iron grip was around Scott's neck, squeezing, and his eyes were filled with rage. Scott served with Nathan, is married to Nathan's sister, yet none of that mattered. A fucking joke was all it took. If Lisa had not come into the room at that exact moment, her husband would be dead.
Sometimes Nathan would just sit on the front porch smoking his cigarettes out of his throat and tapping a metal finger against the wood decking. You never knew what was going on inside his head. Maybe he was fighting from within, but the old Nathan, the one we all knew... He was losing the battle. He was being devoured by this half man, half machine visage of a dead man, who never really came back from the war.
It was a Saturday night trip to the convenience store just down the road, where Nathan's mind finally ripped from whatever sanity had been restraining him. No one knows for sure what happened inside the store. Maybe they were out of his favorite brand of smokes and it just got to him. Whatever it was, the store clerk was killed from blunt force trauma to the head. Another customer called the police as she cowered in the back near the jerky rack.
If Nathan had just walked out... instead he just stayed there, waiting for the cops to show up. Maybe that was the real Nathan in control at that time. At least, I'd like to think that that was the compassionate person we all used to know. Maybe he knew deep down that there was only one way out of this.
After the cops showed did up, he made his way outside. There were three cars covering him. Six cops yelling for him to get on the ground. He flicked his cigarette and charged at them. The only logical and sensible thing to do was to open fire. If they hadn't, the new Nathan would have hurt them or even killed them. He wanted to die but he would have taken them out if he could have. This was the disconnect in his mind. The internal turmoil that was raging within.

We choose to remember the original Nathan. The friend and serviceman who went to war to defend the interests of his country. He was the real Nathan. ﻿